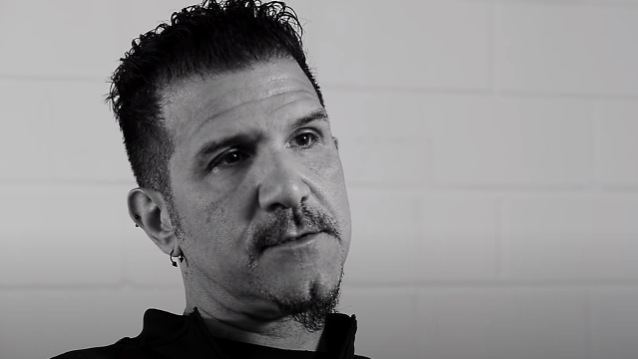 ANTHRAX drummer Charlie Benante says that he is "tired" of not being recognized as a pioneer of the "blast beat."

A type of fast drum beat characteristic of extreme heavy metal styles such as black metal, death metal and grindcore, a blast beat is basically a single stroke roll broken up between the snare drum and the bass drum, with the hi-hat/ride hand playing unison strokes with the bass drum.

Benante discussed his role in developing the blast beat during an August 2019 interview with Drumtalk, the video podcast by German drummer and videographer Philipp Koch, which has just been uploaded to YouTube.

Charlie said (see video below): "There's this style of beat called 'blast beat,' and I will say that the first time ever that type of beat was recorded and played on a record was on this S.O.D. [STORMTROOPERS OF DEATH] record that we did in 1985. And I'm tired of people not crediting that that was the first time. And, of course, people perfected it and play it way better, but that was the first time that a blast beat was on record. If you can prove me wrong, prove me wrong, but I believe that that was the first time. And, like I said, other people have mastered it and done it way better, and I never took it any further — that was it. It fit in that song 'Milk'. Like, when we would play it live, the more I played it, the more I started to develop a different way of playing it. Because I would always play it with a single kick drum, and I would either reverse it, which I think Paul [Mazurkiewicz] from CANNIBAL CORPSE played more of that style of blast beat. I would play it either with the ride or I would play it with the hat, reversing it. When S.O.D. would play more and more shows, I would always develop it and not just do a single kick — I would throw in a double. And then I discovered that some of the black metal bands, later on, were doing it [slightly differently]. So it was being developed even more. And then when I heard the DIMMU BORGIR record 'Puritanical Euphoric Misanthropia', Nick Barker's drumming on that record was, to me, one of those moments where another door opened and he took the blast beat style to a whole other level."

Asked if it felt like he was doing something new when he first came up with the drum beat for "Milk", Charlie said: "I remember when that song came out, 'Milk', with the blast beat in it, and many people were saying, 'What are you doing here? What are you doing?' And there was a part of me that was, like, 'I can't really tell you what I'm doing.' [Laughs] When we would play it, I would always see people watching me play it. And S.O.D. didn't play many shows, of course, but when we did play, we played the whole record. And it was never at the same speed that the record was recorded — it was live and it was just fast, so it was always moving forward."

Hahahaha! Please give me the credit 🤣🤣🤣- #ClickBait I also invented the Internet and the Flowbee #trolllifehttps://t.co/tqrGPxjHk7

Dirty rotten Ep for sure has fast blast like beats but not sure if I’d classify it as a “ blast beat”. They were one of the first to do short songs with all of them blasting

Also NYC Mayem, had those blasts, thought they were explosive

Yep, I know it well but this wasn’t a kinda blast I was referring to. I would have to say Agnostic front did it first or many of the hardcore bands back then.

Also says prove him wrong if you can...#clickbaithttps://t.co/BjhWzhYbJv