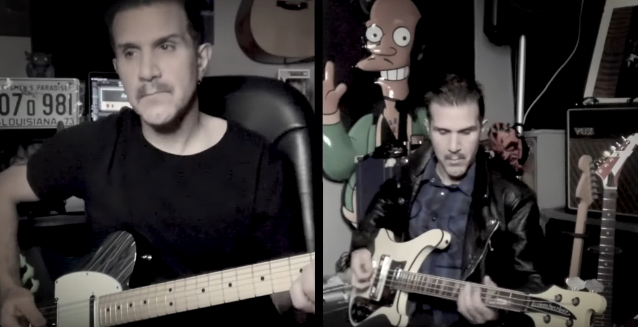 Benante uploaded the video to his YouTube channel (see below),and he wrote in an accompanying message: "I've always loved the IRON MAIDEN Song Revelations, I think it's the highlight off of #pieceofmind . I wanted to do a version with just an army of guitars, layer after layer . This is a shorter version than the one I am going to do but you get the idea. I changed it a bit and had fun with it."

Back in 1988, all of the members of ANTHRAX were big IRON MAIDEN fans. Not only did they love MAIDEN's music, but they appreciated and learned from the band's professionalism, the way they cared about their road crew and their fans, examples they apply to this day with their own crew and fanbase.

In support of ANTHRAX's then-new album "Persistence Of Time", the band did two major tours with IRON MAIDEN — the 1988 European leg of Monsters Of Rock, and the European and North American legs of MAIDEN's "No Prayer For The Dying" in 1990-91. Over the course of the two tours, Benante took over for MAIDEN drummer Nicko McBrain at one show, playing "Number Of The Beast", "Bring Your Daughter To The Slaughter" and the show's closer, "Sanctuary". For ANTHRAX's final show of the "No Prayer For The Dying" tour on March 19, 1991 in Salt Lake City, Utah, the band joined MAIDEN on stage to perform "Sanctuary".

"We were always big IRON MAIDEN fans," Benante said. "The two camps always got along. I've known Steve Harris [MAIDEN bassist] since, like, 1982. That guy, to this day, is the same guy that I met back then. He's just a genuine person and just a great guy. I always wanted to model the band after them, 'cause I always felt that they were just so professional and they really cared about their fans and their crew. It's a good vibe with them.

"So we were on tour together. I was watching Nicko play. And I've always said I wanted to get up and play with them. And the one night I got up and played 'Sanctuary'. Fuck, I was on fire that night; I was just flying. I knew all the parts and all the little cues and stuff like that, and at one point, I was playing and I see Bruce [Dickinson, MAIDEN singer] turn around, and he gives me a 'thumbs up.' And I'm, like, 'I know IRON MAIDEN songs. C'mon.' And then, fast forward to about a year or two after that, we were on the 'No Prayer For The Dying' tour, and I got up and played with them again. This time I did two different songs, and the whole band got up and played.

"It was awesome. To be on stage with your heroes, you feel as if your feet are not touching the floor. It's just a weird thing.

"I remember just playing with them, and Steve was coming up and jamming with me.

"If a bubble could have come out of my head like in my comic books, the bubble would have just been, like, 'Fuck!' It was that amazing. And to this day, I love those guys."