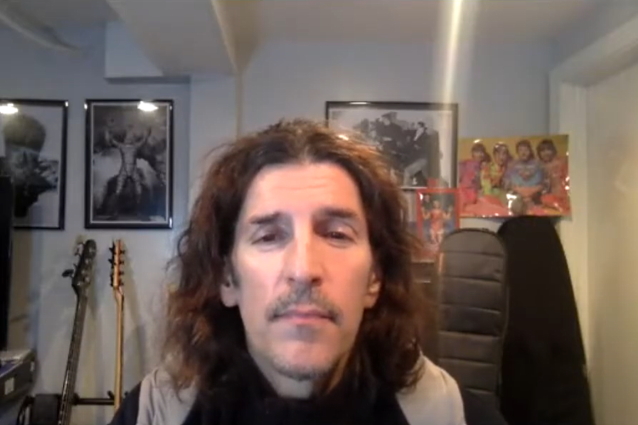 ANTHRAX's FRANK BELLO: 'My First Time Meeting KISS Was So Influential For Me'

In a new interview with Travis Failey of KNAC.COM, ANTHRAX bassist Frank Bello, who is currently promoting his memoir, "Fathers, Brothers, And Sons: Surviving Anguish, Abandonment, And Anthrax", spoke about his first time meeting the members of KISS. He said (as transcribed by BLABBERMOUTH.NET): "My first time meeting KISS was so influential for me; it was so big. And Steve Harris [IRON MAIDEN bassist], because those guys taught me how to treat fans, 'cause I was such a fan. And how kind they were to me, just talking to me. They made me feel like I was one on one, even though they were elevated in my life — they were the gods; they were the heroes. They brought me to a real human place. And that's why I'll always remember that.

"I say it in the book, that taught me the lesson right back then — if you ever get any kind of success in this business, this is how you treat your fans; this is how you treat people one on one and be cool to them," he continued. "'Cause nobody's better than anybody in this life. It's, like, look, we're fortunate enough to play music for a living and all that. They're supporting you. Why would you be a dick? I've heard these dick stories, of these people being not so cool to fans, and it doesn't really make sense. And everybody's got their bad days — I've had my bad days — but for the most part, just be normal.

"My first time meeting KISS — my first time meeting Gene [Simmons] and Paul [Stanley] and Aucoin Management in [New York City]. That was pretty, 'Oh my God,'" Bello added. "That was bigger than life. They were my heroes. I'm actually meeting my heroes. Those were the days… Remember, they weren't seen without their makeup, and they'd cover their faces [in photos]. We were fortunate enough to see them without their makeup, and we felt extra special. Because we're getting to see something that nobody else has seen right now. I see Paul Stanley's face without the star. It was these little things that go through your mind when you're a fan. How does Gene look without his makeup on? That's Gene Simmons? I could see his hair — it's without the ponytail on top, and you kind of think these things. So those were very special times for me, specifically the first time, 'cause I got to se something that I never thought I'd see — KISS without their makeup. It was very special."

"Fathers, Brothers, And Sons: Surviving Anguish, Abandonment, And Anthrax" was released on November 2 via Rare Bird. The foreword was written by Simmons.

ANTHRAX is working on material for the follow-up to 2016's "For All Kings" album, tentatively due later this year.