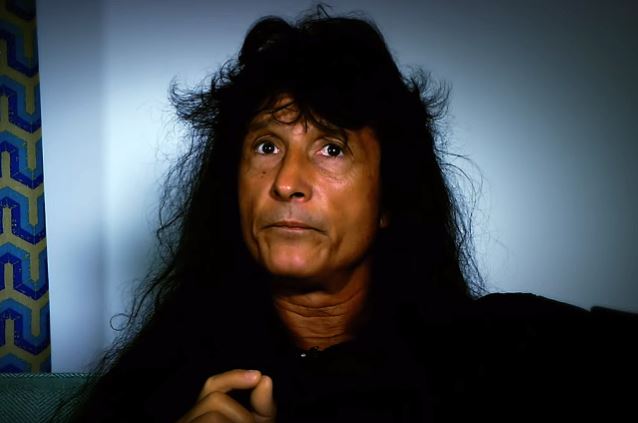 ANTHRAX's JOEY BELLADONNA: 'I Could Have Sang On Any' Of JOHN BUSH-Era Albums

ANTHRAX frontman Joey Belladonna says that there wasn't "any reason" for the band to fire him in 1992 and replace him with John Bush, explaining that he "could have sang" on any of the albums that were made during his absence from the band.

Speaking to MikeJamesrRockShow.com about how it feels to be back with ANTHRAX thirty years after he first joined the band, Joey said (see video below): "Personally, it sucks just to think all those years went by that I didn't really have a chance to do anything. 'Cause I could have sang on any of those records [that were made during the John Bush era]. Not to say that what they did was… whatever reason and whatever style and all that stuff. I could have easily sang that regardless, no bones. It would have been easy to sing. It's just I think they were chasing some other idea. I always say that, whether they disagree. I don't think there was any reason to move. But you know what? We're here now."

On the topic of how being in ANTHRAX today is different from how it was back in the late '80s, Joey said: "It doesn't really change too much for me. If anything, we're really, really more of a business and we're family-oriented, as far as everybody's got family and stuff like that; that's different. I think people are trying to make sure that we do it right, as much as we can. Not that we haven't done it right. But we're always learning. There's so much to go."

Bush recently told Metal Talk about the task of replacing Joey Belladonna in ANTHRAX back in 1992: "I respect Joey Belladonna; he did great for ANTHRAX in his heyday and in the years that he made records and they were popular. You know, I think I just went out and did it from my heart and just said, 'Hey, I'm gonna go out and kick ass and sing to the best of my ability.' And I think we made some great records. I just think they were different records than what ANTHRAX did in the '80s."

In a separate interview, Bush admitted that he "would prefer [ANTHRAX] to play a couple of songs [from my era in their current set]. But I understand why they don't, and I understand why Joey probably is not so embracing of that idea, and I get it. And I hold nothing personal about that whatsoever."

ANTHRAX will release its long-awaited new album, "For All Kings", on February 26, 2016 via Nuclear Blast.