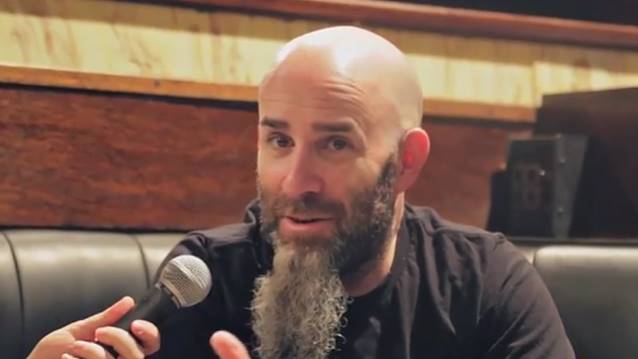 ANTHRAX guitarist Scott Ian is featured in Loudwire's latest "Wikipedia: Fact Or Fiction?" segment. In the nine-minute clip below, Ian sets the record straight on essential ANTHRAX history, METALLICA's James Hetfield calling "Only" a "perfect song," touring with his father-in-law (Meat Loaf) and much more.

ANTHRAX's next album will mark the recording debut with the band of guitarist Jon Donais (also of SHADOWS FALL),who replaced Rob Caggiano in January 2013.

Regarding whether Donais is now officially an ANTHRAX member, Scott Ian told Metal Insider: "For all intents and purposes, he's in ANTHRAX. He's going to be there for everything we do moving forward. As far as how you title it, yeah. As far as I'm concerned, Jon is in ANTHRAX and will be playing leads on the record and will be touring with the band starting at the end of May 2014."

"Worship Music" has sold more than 110,000 copies in the United States since its September 2011 release, according to Nielsen SoundScan.