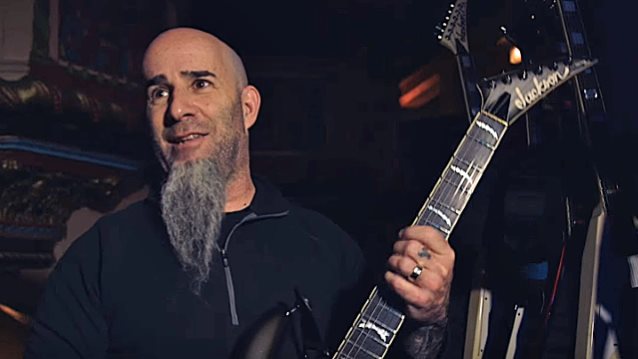 Fret12 has uploaded a video clip of ANTHRAX guitarist Scott Ian giving a tour of his stage rig. Check it out below.

Asked in a 2015 interview with Guitar Interactive magazine what advice he would give to up-and-coming guitarists, some of whom believe that strong social-media skills are as important to success as the ability to play guitar and write songs, Ian said: "I wouldn't know. I don't know what to tell somebody these days, because so much of the stuff… The Internet didn't exist when I was coming up and when ANTHRAX started, and for years and years and years, so… We were a band for… Let's say, if you wanna say, around '97 or '98, when the Internet kind of started becoming a tool that a band could use in a myriad number of ways, we were a band for 17 years before that became even something anyone knew of. So I have no idea. I don't know anything about any of that stuff. The only thing I can say to anyone is just play what you love. Play what makes you happy. That's all I ever did, and that's all I know most of the people I know in bands ever did. Granted, we're from a different time. So, these days, I don't know. I don't know…"

He continued: "Do you need to know how to use social media to be a guitar player? I don't even understand what that means? My attitude is, play what makes you happy and practice songwriting. Write songs.

"I look at guitar probably in a completely different way than most people, and probably most of the people that read your magazines. I would rather listen to Malcolm Young [AC/DC] play an A chord than anything else on guitar — than anything, other than maybe Eddie Van Halen. I'm a caveman when it comes to guitar. Guitar, for me, has only ever been a tool to write songs. Guitar is a tool used to create music and to play with other people. That's what guitar is for me. That's what makes me happy as a guitar player.

"If you're a kid who wants to learn how to shred like… I don't even know who… whatever is the new-school…. I don't know who's the best lead guitar player out right now under 30 years old. There's these super-technical bands with eight strings. Like, I know a band… And I'm not being negative about them, but I know there's a band called PERIPHERY, and I've heard of them, and I've heard some of the stuff, and I get it. From a technical standpoint, it's amazing! But it's not something I personally am gonna go home and put on. I totally respect it and I appreciate it, and I understand why kids are getting into that."