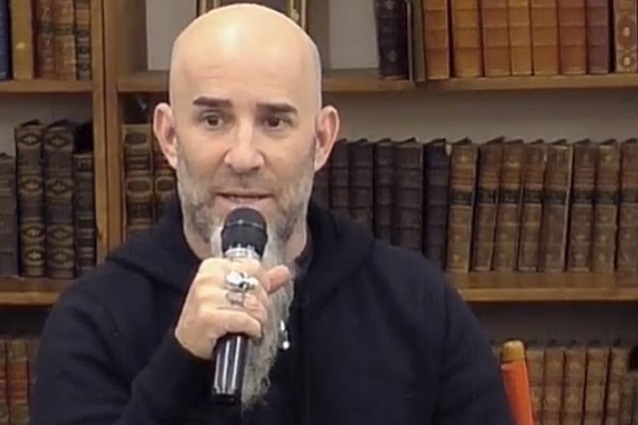 ANTHRAX's SCOTT IAN: How Fatherhood Has Changed My Life

On December 13, ANTHRAX guitarist Scott Ian took part in a question-and-answer session at the Strand bookstore in New York City about his second book, "Access All Areas: Stories From A Hard Rock Life". You can now watch the discussion below.

Asked how fatherhood has changed his perspective on life and touring, Ian said: "I think fatherhood, for me, personally, it changed everything. It changes your perspective on everything, and I feel like if it doesn't, then you shouldn't be a parent. Because your world is completely different when you have a child and you look at everything differently. In so many ways, it makes being alive so much better, because you don't think you can have any more love in your life and then you have a child. It's amazing what happens. And only if you have a child, you know.

"Don't get me wrong — I love nieces and nephews and cousins' and my friends' kids, but until you have your own, you have no idea what it actually means — this thing that opens up in your heart and your soul, and it changes everything," he added. "And that's all the good stuff. On the other side of it, it also makes the planet… As much of an optimist as I am in general in life, the world is generally… There's a lot of things to be scared of on this planet; the world can be a scary place in a lot of ways — certainly in the last 15 years — and having a child amplifies all of that as well, because you have a child to protect and a child to worry about.

"People always say, 'Well, how could you still write angry lyrics for a metal band when you get older? You're in your 50s now. How could you still be angry?' I'm, like, 'Have a child and watch the news, and then tell me you're not angry.' It's so much easier to be angry now about things. Granted, that's kept in a little box that I use when I need it. I'm not some crazy lunatic walking around the streets screaming about the government. I keep that in a little box, and I get to get that out of me, being in a band and being able to write and play shows. But, yeah, it's kind of a really great balance."

Ian's son, Revel Young Ian, was born on June 19, 2011. Revel's mother is Pearl Aday, the daughter of legendary crooner Meat Loaf. Named after the infamous Janis Joplin, she has toured as a back-up singer with MÖTLEY CRÜE and she and her band have opened for VELVET REVOLVER.

"Access All Areas: Stories From A Hard Rock Life" was made available on December 12, 2017 from Hachette Audio as a digital download, and in hardcover and ebook from De Capo Press.