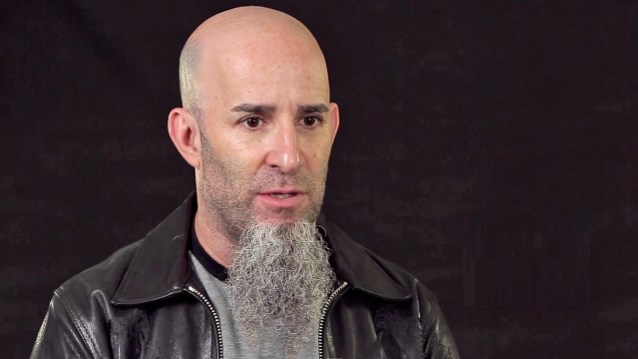 ANTHRAX guitarist Scott Ian recently spoke to Ultimate Classic Rock about how he first discovered KISS. Ian said (see video below): "I was at the epicenter. I bought… Well… Let me backtrack… Before I even bought KISS 'Alive!'… I heard 'Rock And Roll All Nite' on the radio in my parents' station wagon as a kid. [I] loved the song — like, flipped out over the song. I was, like, 'I've gotta hear that again.' But you're at the mercy of the radio; it's not gonna come right back on. And [I] then saw KISS on TV within the week or something; I had no idea what they looked like. And then I see them on TV with the costumes and the makeup. As, at the time, an 11-year-old whose life revolved around music and comic books and horror movies, there it is all wrapped up in one fiery, bloody package. It couldn't have been more perfect. I mean, that was… it literally was… That was a needle right to the cortex. I mean, forget even shooting in the arm. It was, like, right there. And they owned my soul for the next three and a half years, basically. And it formulated just so much about… It was my gateway drug into other music, 'cause, before KISS, Elton John was my favorite thing and music my parents listened to, whether it was SIMON & GARFUNKEL and DOOBIE BROTHERS and stuff like that… CROSBY, STILLS & NASH… But KISS was my first thing; I bought KISS 'Alive!' with my own money; it was, like, the first album I ever bought with my own money. And that opened the door. And then, not long after KISS, I was listening to Ted Nugent and CHEAP TRICK and the RAMONES and BLACK SABBATH and… you know, just always looking for more stuff."

Ian's autobiography, "I'm The Man: The Story Of That Guy From Anthrax", was released on October 14, 2014 via Da Capo Press, a member of the Perseus Books Group.

For "I'm The Man", Ian worked with Jon Wiederhorn, co-author of the books "Louder Than Hell: The Definitive Oral History Of Metal" and "Ministry: The Lost Gospels According To Al Jourgensen". Wiederhorn is a senior writer at Revolver and a regular contributor to Guitar World, Noisey.com, eMusic.com, and Yahoo Music! He has also worked on staff at Rolling Stone, Guitar, Guitar.com, and MusicPlayer.com.