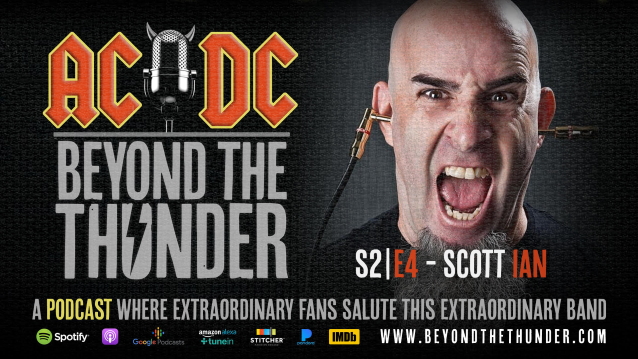 While new photos of AC/DC "unintentionally" surfaced on the band's homepage, along with the band's online teasers "powering up," confirming longstanding reports that all of the major players have regrouped for a new release, fans remain impatiently frothing for more. To keep that spark alive, season two, episode four of "AC/DC Beyond The Thunder" podcast features the founding member from one of the "Big Four" — Scott Ian of ANTHRAX, who not only learned how to play guitar by listening to rhythm king, Malcolm Young, inspired by the energy, stamina and stage performance of Malcolm's brother, Angus Young, and confirms the hunt for a new tattoo of his favorite singer, Bon Scott.

Ian went on to create thrash metal band ANTHRAX one of the "Big Four" in the 1980s alongside MEGADETH, SLAYER and METALLICA, but is also known for his appearances on TV as a metal host, professional gambler, and tattoo aficionado. Ian even made the life-long commitment to put both iconic Young brothers on his skin to commemorate just how much AC/DC has impacted his own career trajectory, by tattoo maven, Kat Von D for her show "LA Ink", but not without permission from AC/DC's management first.

"You don't just call AC/DC. It's not that simple!" the New York-bred guitarist laughs, who talks about the hoops he had to jump through just hours before taping, before showing off his treasured tats.

Ian then goes on to reveal the next bit of indelible real estate set aside for his favorite singer of all time, Bon Scott. "I had never heard a voice like Bon's before," acknowledges the original member and main lyricist of ANTHRAX. "And I will admit, when I first heard Bon singing… I didn't get it. I had never heard a sound like that in my life."

The latest podcast episode also examines Ian's favorite AC/DC song of all time, and AC/DC songs that he's covered, including a rousing version of "Walk All Over You", as well as "Sin City" alongside peers Sebastian Bach, Ted Nugent, Evan Seinfeld from BIOHAZARD, and Jason Bonham. But Ian also admits, like everybody else, that playing AC/DC is not easy.

As ANTHRAX experimented with different genres, including a collaboration with PUBLIC ENEMY, and influencing several sub genres over the years, Ian attests to Angus and Malcolm Young's unwavering consistency as a secret to their success. "AC/DC speaks to everybody. If you like any type of rock and roll, then AC/DC is going to move you."

"They have made my life easier, besides all the joy they've given me. One of the questions I get asked the most over the years in interviews is, 'What's your favorite band?' At some point I was finally able to narrow that down. [Now] I have the answer to that question like that!" snapping his fingers.

As AC/DC's best-selling hard rock album of all time, "Back In Black", celebrated its 40th anniversary on July 25, Season 2 of "AC/DC Beyond The Thunder" is slated for many more high-profile guests from various walks of life, recalling their life-changing moments thanks to this Australian band.

Wondering if the film would ever catch lightning, Ferguson and Squiers decided to unearth these wonderful stories of extraordinary fans discussing their affinity for AC/DC and harness that energy into a vehicle that just might work…a podcast. After capturing over 50 interviews and with a newfound momentum to create all new episodes with sound engineer, Eric Kielb, "AC/DC Beyond The Thunder" is back, serving up inspirational stories about the fans, for the fans, by the fans. For those about to listen, we salute you.