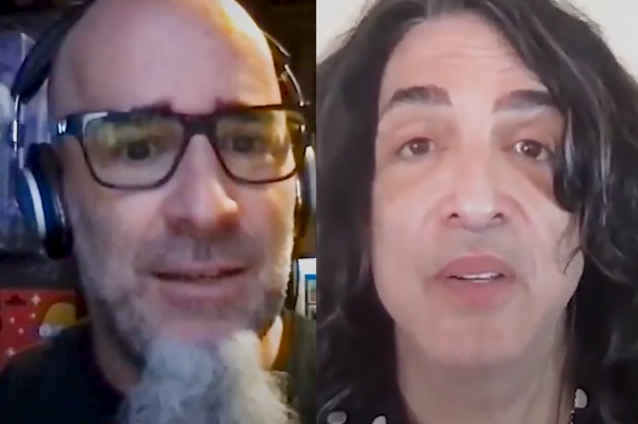 ANTHRAX guitarist Scott Ian interviewed KISS frontman Paul Stanley for an all-new episode of Ian's show "Never Meet Your Heroes", which airs on Volume, SiriusXM's 24/7 talk radio channel dedicated to music. A two-minute snippet from the chat is available below.

"Never Meet Your Heroes" sees Ian interviewing his celebrity idols and musical influences about what inspires them. The program launched in late 2016 and featured Corey Taylor of SLIPKNOT as Scott's first guest.

Listeners can find "Never Meet Your Heroes" on Volume (channel 106),as well as anytime on the SiriusXM app. Streaming access is included for most subscribers. Go to www.siriusxm.com/ways-to-listen to learn more.

In a 2016 interview with Ultimate Classic Rock, Ian stated about how the idea for "Never Meet Your Heroes" came about: "Well, I wasn't out there looking for it until somebody called me from Sirius and asked if I'd be interested. They launched this Volume channel of all talk about music. There are some people up there who have seen my talking shows, and I guess felt the same way — that I'd be right for their channel."

SiriusXM's Volume channel is home to a variety of programs dedicated to the conversations about music. Programs include "WHOOOSH!" hosted by Simon Le Bon, "The Jimmy Jam Show", "Lefsetz Live" hosted by Bob Lefsetz, "Feedback" with Nik Carter and Lori Majewski, "Debatable" hosted by Mark Goodman and Alan Light, "Trunk Nation With Eddie Trunk" and more.

Don't miss an all-new episode of Never Meet Your Heroes w/@Scott_Ian where he sits down w/rock icon @PaulStanleyLive to discuss his decades w/@kiss and his new Paul Stanley's Soul Station album "Now And Then." Tune in tonight at 9pm ET or listen anytime on the @SIRIUSXM app! pic.twitter.com/7FzdIfD4s4