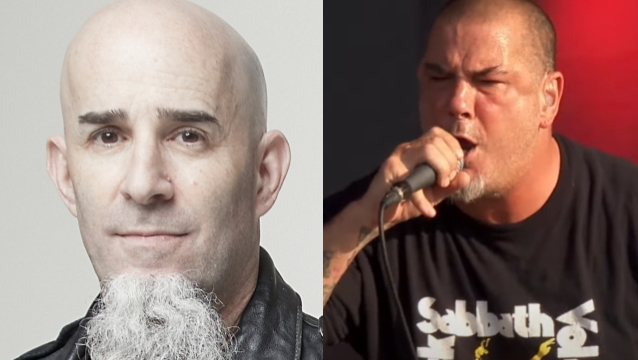 ANTHRAX's SCOTT IAN On PANTERA Reunion: 'This Is A Tribute, And That's What It Is Meant To Be'

Ian discussed his views on the PANTERA comeback in a new interview with Primordial Radio presenter Dewsbury. Asked how he feels about Zakk paying tribute to Dimebag, Scott said (as transcribed by BLABBERMOUTH.NET): "Oh, man. You know what? The two of those dudes [Zakk and Darrell], they were as thick as thieves, those two guys. They were so close, there was definitely a bond… I won't go as far as to say… Look, obviously, Darrell and Vinnie were brothers. Zakk was probably as close as you could get to actually having a blood relation to Darrell. Those two dudes were, like I said, thick as thieves, man.

"As long as I knew Darrell, and I hate to ever say, 'I knew the guy and this is what he would want — I feel a little uncomfortable ever doing anything like that — but in this situation, I feel like I would make an exception because I would truly think Darrell, based on my many, many, many, many conversations over the years with him, would have definitely said, 'If I ain't here, you've gotta get Zakk up there to fucking fly the flag,'" he continued. "It just sounds like something Darrell would have said. So, yeah, I think Zakk is — he's the guy; he is the guy.

"And I think the other thing… Not to get too much into the weeds on this, 'cause I know there's a lot of people out there with a lot of opinions. That's how it is — because of the Internet, everybody gets to put their opinion out there. There's no editors anymore — it's just opinions. So if you want my opinion, this is a tribute, and that's what it is meant to be. This is a tribute to one of the best bands in the history of heavy metal. It's a tribute that also happens to have two of the bandmembers in it, along with two guys who, I don't think there's anyone better to be able to pay tribute to PANTERA than Zakk and Charlie."

As for how Zakk plans to approach the PANTERA gig, Scott said: "I hope Zakk just gets up there and does Zakk. I don't look at it as a cover-band thing. The reason you wantZakk there is because, well, first of all, his technical ability is on the level where he could actually play Darrell's solos. You have to be of a certain level of a guitar player to even be able to do that. Of course, Zakkcan do that. So, yeah, he's got that ability. But you also want it to be Zakk — you want it to be Zakk, not just him trying to cover Darrell. That's how I feel about it anyway. The reason Zakk is there is because he's Zakk, because of his personality, because of his playing. They could have just found a guy in a PANTERA cover band who could probably play it note for note, and if you closed your eyes, [it would sound just like Darrell]. But I just hope Zakk gets up there and pays his tribute to his brother and to PANTERA."

Asked what he thinks about Zakk's recent admission that he was turning to guitar tutorials on YouTube while learning some of Darrell's more complicated parts, Scott said: "Yeah, well, why not? It's a lot easier than sitting there going back and trying to listen to something four thousand times to get it right. Someone's already done the work for you. [Laughs]

"When we [in ANTHRAX] were out on the tour back in August and September with [Zakk and the rest of BLACK LABEL SOCIETY], we would be in the same hotels a lot on a day off and I would see Zakk in the lobby or something. I'd be, like, 'We're going to get something to eat. You wanna go get something to eat?' He's, like, 'No. I've gotta go back to my room. I'm in Pantera University tonight.' So he'd be doing his homework. So I was, like, 'Oh, yeah. That's right. That's where you need to be. Yeah, I hear ya. No worries.' [Laughs]"