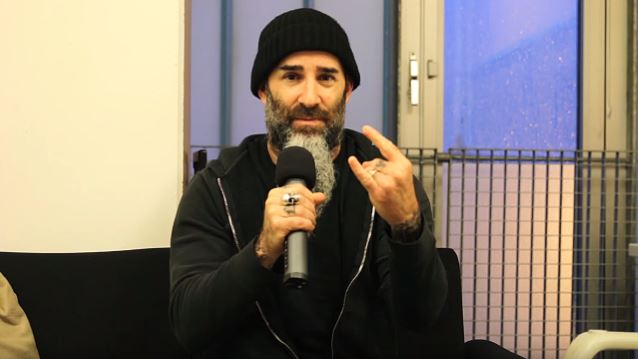 ANTHRAX guitarist Scott Ian has commented on the events of November 13 in Paris, France, when more than 129 people were killed in seven coordinated terrorist attacks.

During a November 19 chat with Stay Tuned Interviews in Luxembourg, Ian was asked if the events that took place six days earlier have made him rethink his own safety while touring around the world. He responded (see video below): "Yeah. I mean, we're thinking about it, of course. We're all human beings on this tour [which also features SLAYER and KVELERTAK]. Meaning, we're all empathetic and compassionate people who feel horrible about what happened in Paris. And it does make it a bit difficult to go back to your work, which, for us, happens to be this — playing shows. It made it very strange the next day, playing a show, that's for sure. But, yeah, it's strange."

He continued: "I think my personal immediate reaction was I wanted to go home. I wanted to go home and be with my family, not be on tour anymore right now. But at the same time, no one on this tour is gonna let what happened stop what we're doing. Until somebody tells us, 'You can't play shows,' we're going to play shows.

"I understand a lot of bands canceled their shows in Paris. Of course, it makes sense. But we played Paris three weeks before the murders at the Bataclan.

"Nothing's gonna stop us from doing what we do. Nothing's gonna take away our freedom, and hopefully nothing will take away the audience's freedom that is still coming out to shows — not just our tour, but any tour that's out there, or any public gathering, whether it's a football match, or whatever it is. That's what terrorism does — it creates fear and it stops people from living their lives. And as hard as it is to sometimes ignore that and go on with your life, it's really what you have to do. Unless you're just gonna live in fear and never leave your house, and I don't know how anybody can live their life like that. So, yeah, it's definitely difficult."

Ian added: "Over the last few shows, there's been security meetings with the bands, showing us where our exit route would be from the stage, in case something happens. We've been on tour since 1984, and this is the first time in my life I've ever had police telling us, 'This is your best way out of the building.' It's fucking scary shit, that it's come that close now to our world. I never thought that the little bubble that we live in in heavy metal, why would anyone ever target that? And it's not like they were targeting heavy metal — they were targeting a venue that was filled with people. It just so happened that a rock band was playing there. But still, it's very, very close to home, and it's fucking scary."

Ian also talked about the inspiration for the new ANTHRAX song "Evil Twin" and how it relates to the terror attacks in France. He said: "What happened in Paris [on November 13], it's not the first time this shit has happened. This shit's been going on a long, long time — you know, terrorism. So it's something that, obviously, I've been thinking about quite a bit in my lifetime. I've touched on it before in other songs. And I specifically wrote the lyrics to this song not long after the Charlie Hebdo shootings in Paris. It was just something that… The anger that I had inside me needed to come out, and it came out cathartically through writing song lyrics. That's how pretty much any song I ever write is some type of catharsis for me. So it wasn't a specific incident; it's just terrorism. That's what that song is about."

He continued: "It's horrible that it happened again, and, sadly, it's going to happen again… and again and again and again and again… Because there is no solution for this type of war. Because if there was, there already would have been a solution years ago, and the world would be over. But people on this planet, I truly believe, especially the people in charge, they don't want peace, because there's no money in peace, really, when it comes down to it. There's a lot of money in weapons manufacturing and the business of war. And I don't truly believe there ever will be peace on this planet — because of that."