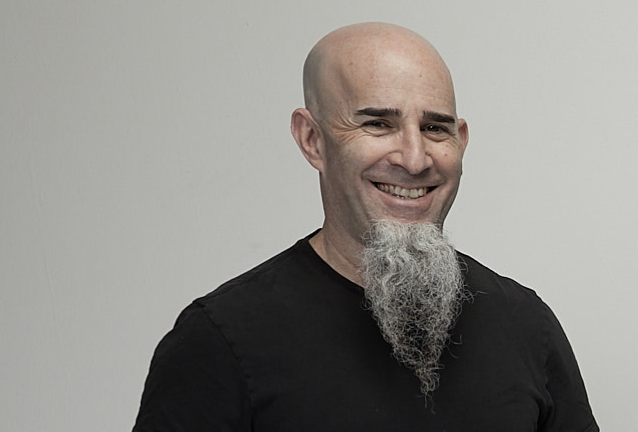 ANTHRAX's SCOTT IAN On Touring Post-Pandemic: 'In My Mind, I'm Not Going Back To Work, Probably, Until 2022'

ANTHRAX guitarist Scott Ian recently spoke to "Hardcore Humanism With Dr. Mike" about how he is dealing with the coronavirus crisis and what the touring circuit might look like post-pandemic. He said (hear audio below): "We never would have electively, as a band, said, 'Let's take two years off.' It's not something we would ever have done. Financially, it's not something we could afford to do even. But even just on every level, that conversation — 'Let's take a hiatus' — that's not gonna happen. We've been forced into that situation. So if there's one silver lining about this for me, [it's] I get to be home with my family for longer than I've ever been. That's awesome. So figuring out ways to work with everything going on on the planet and being able to stay creative and stay busy and work and make things work financially, it was kind of like starting over, in a weird way, four months ago.

"All right, what I do is not essential, which that was not hard to come to grips with," he continued. "I understand. I get to be home with my family. Now I get to do this full time. And then how are we gonna make it work with the band so financially we could keep our heads above water as well? Because who knows how long this is gonna be? We're gonna be the last ones to go back to work. So, figure it out.

"There's a part of me now that's in those same shoes I was in when I was 17 years old, because it's trying to figure out, how are we going to do this? Luckily for us, this year was kind of an off year from touring anyway, because we're writing a record, and the plan was to have it out at the end of this year. That's all changed. We're hoping next summer. But it's still a crapshoot. Nobody knows. Everyone's saying everything's gonna happen again in '21 — maybe.

"In my mind, I'm not going back to work, probably, till, I'm thinking, '22," Ian said. "Realistically, that's when things will maybe start to get somewhere back to normal, for my world, as a touring musician. So now it's become a case of, how do I keep things running for the next two years — with the luxury of being home. Because if it was up to me, I'd just hang around and jam with my son all day long. But now I have to be able to have the balance of I get to just be home and I get to go to the beach and hang out. And it becomes very easy to do nothing. And when I say nothing, I don't mean nothing in a lazy way. I mean, not have anything to do with my band and literally be on vacation from my work. So it's almost like a retraining. Even doing interviews, I kind of, at one point, said, 'I'm not doing anything.' You know what? I have a chance now to literally take a break. And I did. We kind of did. And then we started doing these 'Instajam' collaboration things online and whatnot and slowly but surely getting our feet back in the game, and I'm sure that'll pick up over the months.

"But I'll tell you what: I love being home," he admitted. "I love not traveling. I love not getting on a plane. I was looking at our schedule, 'cause it was all on my calendar. I was supposed to be in Europe for the last two weeks playing festivals. I was, like, 'Oh my God. I am so glad I am not in the Ukraine right now.' Imagine there was no pandemic. I'm literally, like, I'm home right now, and I'm sitting in my living room hanging out. Just the idea of that, it's never happened. We've never canceled shows. It was out my hands. And it was nice to have no power. For kind of the first time, it's all out of my hands. It's, like, 'Hey, there's nothing I can do. [I'm] just gonna hang out here with my family. You tell me when it's okay to come back to work.'"

The 30th-anniversary Deluxe Edition of ANTHRAX's "Persistence Of Time" album was released on August 21 via Megaforce Records. Produced by ANTHRAX and Mark Dodson, it was made available exclusively on disc and vinyl. The CD package includes two CDs and one DVD, the vinyl edition offers four LPs, as well as revised cover art that reflects what had been the album's original visual concept.

Last week, Ian said that ANTHRAX has "a lot of material" written for its next studio album. The follow-up to 2016's "For All Kings" will be ANTHRAX's third full-length release since the 2010 return of singer Joey Belladonna, who came back into the fold for the "Big Four" shows with METALLICA, SLAYER and MEGADETH, in the process helping inspire a new wave of creativity.