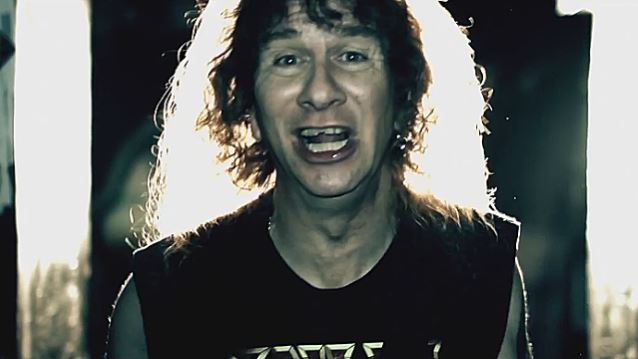 "Hope In Hell", the new video from Canadian metal legends ANVIL, can be seen below. The clip was again created by Swedish director Rene U Valdes of Greenworks Productions.

"Hope In Hell" is the title track of ANVIL's latest album, which sold a little under 800 copies in the United States in its first week of release. The disc followed up "Juggernaut Of Justice", which opened with around 1,600 units back in May 2011. The 2009 re-release of the band's 2007 CD, "This is Thirteen", registered a first-week tally of 1,400 to enter the Top New Artist Albums chart at No. 19.

ANVIL vocalist/guitarist Steve "Lips" Kudlow told Horns Up Rocks! in a recent interview that the band will spend most of 2015 on the road, but will return to the studio at the end of the year to record the follow-up to 2013's "Hope In Hell". He said: "We have a new album pretty much all written, but we're gonna be busy probably 'till next September. So that's when we plan to go in and record again."

Regarding how the songwriting in ANVIL works, drummer Robb Reiner told "Slayer Tania": "In ANVIL, Lips writes generally most of the lyrics. I contribute a little bit here and there. When he asks me, sometimes I can contribute something. But primarily, Lips comes up with the lyrics and the primary riffs and stuff. We arrange all the music together. And that's basically how ANVIL works. It's a two-man thing. Lips and myself are the face of ANVIL."

ANVIL recently parted ways with bassist Sal Italiano and replaced him with Chris Robertson. Lips told M.E.A.T.'s Drew Masters that Chris has actually been part of the ANVIL camp for some time now, having been both their rehearsal bassist as well as a member of their road crew. Lips also stated that he's glad the band is, once again, "all Canadian — that is the heart and soul of ANVIL."