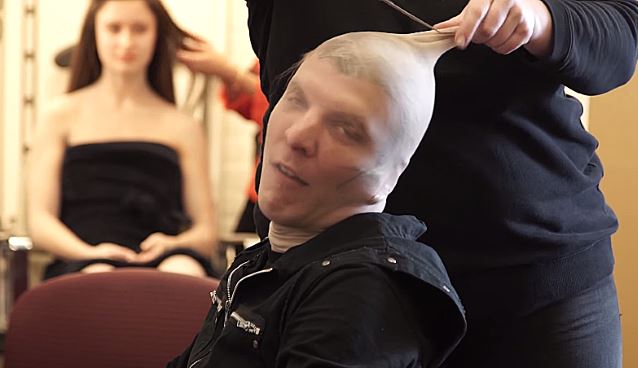 Behind-the-scenes footage from the making of "Cold Blood", the new video from cello rockers APOCALYPTICA, can be seen below. The song is taken from the band's new album, "Shadowmaker", which will be released on April 21 via Eleven Seven Music Group's Better Noise imprint. The Finnish musicians — accompanied by their American lead singer Franky Perez — recorded the CD with Grammy Award-winning producer Nick Raskulinecz (FOO FIGHTERS, DEFTONES, MASTODON).

In a recent interview with Australia's The Rockpit, APOCALYPTICA's Eicca Toppinen stated about "Shadowmaker": "It's always hard to talk about albums without being a nerdy musician. I think it's a totally new kind of record for APOCALYPTICA, especially because we have one singer on the whole album, and I think it's making the whole album more solid. It's more of a band record compared to the album that we have had guest vocalists, so I think it's more solid.

"We had a break when we stopped touring for '7th Symphony', we had one year off, we didn't write a single song for a record, nothing except for 'Wagner Reloaded', but for the regular stuff, nothing. And after the break, we came together and if we wanted to do something, we have to do exactly what we want to do and this record is the result of that, that journey.

"We wanted to challenge ourselves even more and we wanted to be tight as a band before the pre-production and the thing that Franky [Perez, vocalist] was part of the pre-production, we spent weeks with him in the rehearsal room arranging the songs and getting things more defined before we went into the studio.

"I think this album is full of attitude, it's a real attitude record."

Asked how APOCALYPTICA ended up hiring Franky Perez to handle the vocals on the entire "Shadowmaker" record, Eicca said: "It was actually the beginning of June last year when we made the decision to, 'Okay, there's no more guest vocalists on this record. We need to find a guy who makes the record and will tour with us for the record. It's like a puzzle where all the pieces of the puzzle are spread all over, they are not connected, and we need to get those pieces connected. And ways to have one singer to make the whole thing more understandable for people, to make the working circumstances more comfortable for us where things are not so dependant on people outside of the band — the guests, the managers and the label — so it's all about us."