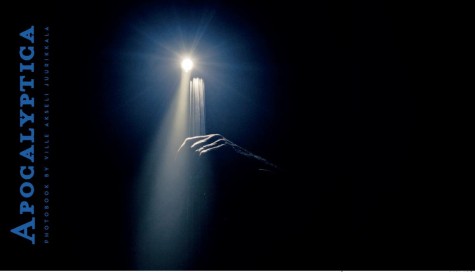 A four-minute video clip in which Paavo Lötjönen of Finnish cello rockers APOCALYPTICA and the band's photographer and close friend, Ville-Akseli Juurikkala, present the group's newly released photo book can be seen below.

APOCALYPTICA has played more than 1,000 live shows in over 50 countries and experienced countless stages, backstage areas and extraordinary encounters in all parts of the world. Since 1993, APOCALYPTICA not only overcame borders musically, but also took its tour program around the globe relentlessly. Ville-Akseli Juurikkala has been accompanying the band for some years now, recently capturing the most beautiful, exciting and unexpected moments of the "7th Symphony Tour". These pictures are now released as a premium photo book. The book is being distributed in cooperation with the British company Pledge Music. Founded in 2008 by musician Benji Rogers, Pledge Music offers artists a structure to make projects possible solely by the direct support of their fans, and at the same time helps raising money for charities. Via so-called "pledges," the fans "promise" to contribute to a certain project in exchange for an issue of the product as soon as it is finished. This way, the "pledgers" virtually become A&R managers, record companies, or — in this case — publishers.

Commented the band: "You as our fans have always been supportive and now we want to share the process of making this book with you. With every single 'pledge,' you not only support the book's release, but also help raising money for a good cause. In our case, you are supporting the Florence Home Foundation, an organization that takes care of projects for women and children in India's poorest regions. In addition, you'll receive an eBook with images that didn't make it to the printed version and secure the chance of getting special merchandise, signed memorabilia and exclusive bonus material. And we dug deep to find interesting stuff for you ...

"Thanks a lot for your support; we hope you'll like the book as much as we do!”

About Pledge Music: Pledge Music tries to keep its offering very simple — an artist sets a target to raise a certain amount of money for a desired project. He then approaches his fans to ask them for so-called "pledges" towards the total, in return for an issue of the specific project. The "pledges" are tiered, so that the fan, in this case for example, can contribute for just one copy of the printed book, slightly more for the book plus a signed fan item, or for a bundle including book, fan item and exclusive bonus track and so on. The artist determines himself how he wishes to motivate the "pledge amounts." Unlike other fan-funded offerings, Pledge Music does not take any money until the "pledge target" has been met 100%. In addition, the artist retains all rights to his project. Pledge Music is not interested in owning any rights that belong to artists.