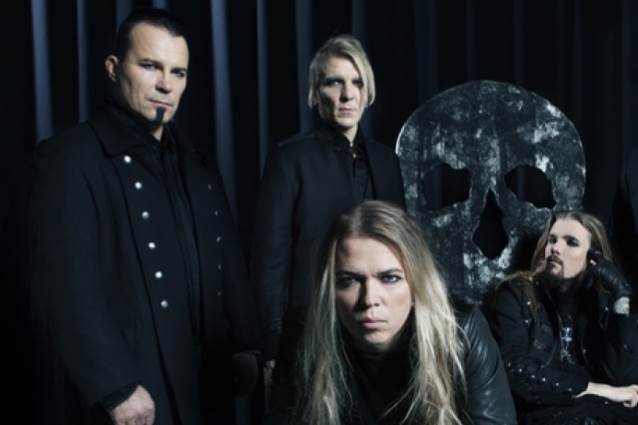 The Finnish cello rockers have spent most of the last two years touring behind the re-release of their epic debut, "Plays Metallica By Four Cellos". The remastered version of the instrumental cello-driven rock opus contains never-before-released instrumental recordings of "Battery", "Nothing Else Matters" and "Seek & Destroy".

In a brand new interview with Kaaos TV, Toppinen said that APOCALYPTICA is planning to enter the studio before the end of 2018. "We have not written yet much," he said. "We've been planning a lot, because, after this tour, there are so many different options we could do. So we've been figuring out what feels most exciting for ourselves, and maybe what would be something that somebody would listen to. But definitely we'll go to the studio in the winter."

He continued: "At the moment, it looks like… there's a strong feeling that we'll make an instrumental album. Because on the previous ones, we always combined the instrumental songs with the vocal songs, and it was great to have the featuring artists, it was great to work with Frank Perez for the 'Shadowmaker' album. But then, on the other hand, it became a bigger interest for us, like, okay, it would be interesting to make a full instrumental album, so there's no compromise with anything. So maybe it's gonna be something really, really crazy… that nobody did before. Because that would be most interesting to make an album that doesn't sound like any other album you've ever heard. Because we've been able to do that already a couple of times in the past — to make music that doesn't relate to… You can't compare it, 'This sounds like this.' I think especially the first album, of course, it was kind of revolutionary, because it sounded like nothing else sounded before. And also, I think the 'Cult' album [2000], there's no other album you can compare it to, so it's a very unique piece of art. And that's something I find, and we all find, very interesting. And because also, in today's world, life is not so much about albums anymore."

Toppinen went on to say that while he personally likes making full-length albums, APOCALYPTICA has "the freedom and possibility to make singles. So we don't necessarily… if we want to collaborate with some singers and make songs together for whatever purposes, we don't need to actually add them to the album to sell albums — because you can work in different levels," he explained. "I think that's an advantage of modern times.

"It's a bit like we did with the 'Cult' album — we did the 'Cult' album fully instrumental, but then we felt like, 'Okay, we'd like to do something with vocals,' so we made 'Path Vol. 2' with Sandra Nasić, and then we did 'Hope Vol. 2', and then we just had special packaging, so they were released as singles but also for the special edition," he said. "And same thing with the 'Reflections' album [2003] as well. With two albums, we did the same — we released an instrumental album and then did the vocal collaboration as an independent thing. And I think that that's maybe the formula. At least it feels so [right now]."

Eicca explained that it's possible APOCALYPTICA's plans will change once the band has accumulated an adequate amount of new material to record a full-length album. "You never know before you write enough music and see what it starts to tell you," he said. "Because whatever plan you have, at least for me — it's, like, whatever plan I have, and we have together, it's, like, you can have the plan, but when you write the music, the music starts to tell you what you should do. So it can change. So it's, like, never say never — it's that kind of thing. It can change, but I'm pretty convinced that the next album will be instrumental. But there might be even vocal tracks before the album. It's always a matter of when right things come together in the right way. When right people meet and the timing [is right], and if the song is great, why not release a single then?"