ARCH ENEMY will embark on a headlining tour this fall in support of its new album, "Will To Power", due out September 8 via Century Media Records.

The first leg of the trek will take the band across Eastern Europe from September 15 until October 11 with support act JINJER. The second round of dates will take place in early 2018 — from January 12 until February 7 — across Western Europe and feature support from WINTERSUN, TRIBULATION and JINJER.

ARCH ENEMY bandleader and chief songwriter Michael Amott comments: "Very happy to already announce our 'Will To Power' European headline tour for early 2018. We can't wait to get back out there with a new fresh ARCH ENEMY show full of cool surprises! And what a lineup! We have assembled a killer tour package with some amazing bands for you. WINTERSUN, TRIBULATION and JINJER are all bands with their own unique and impressive live performances. This all adds up to an epic night of metal that should not be missed!"

Finnish metallists WINTERSUN commented, "We're super excited to announce that we will be supporting the mighty ARCH ENEMY on their European tour in January-February 2018! Hope to see you all there!"

Labelmates TRIBULATION added: "It is happening again! We are returning to the road in conjunction with the release of our new album, first stop Europe with no other than ARCH ENEMY. See you all soon!"

JINJER chimed in, stating, "We are literally counting the days until this tour starts! It's everything that we've been working up to for the past few years: bigger venues, bigger crowds and smashing the stage every night with the likes of a heavy metal giant like ARCH ENEMY. This tour will be one for the record books for sure!"

Co-produced by Amott and drummer Daniel Erlandsson, "Will To Power" was mixed and mastered by longtime collaborator and friend Jens Bogren (OPETH, AT THE GATES, DIMMU BORGIR). The disc's captivating cover artwork was designed by Alex Reisfar. 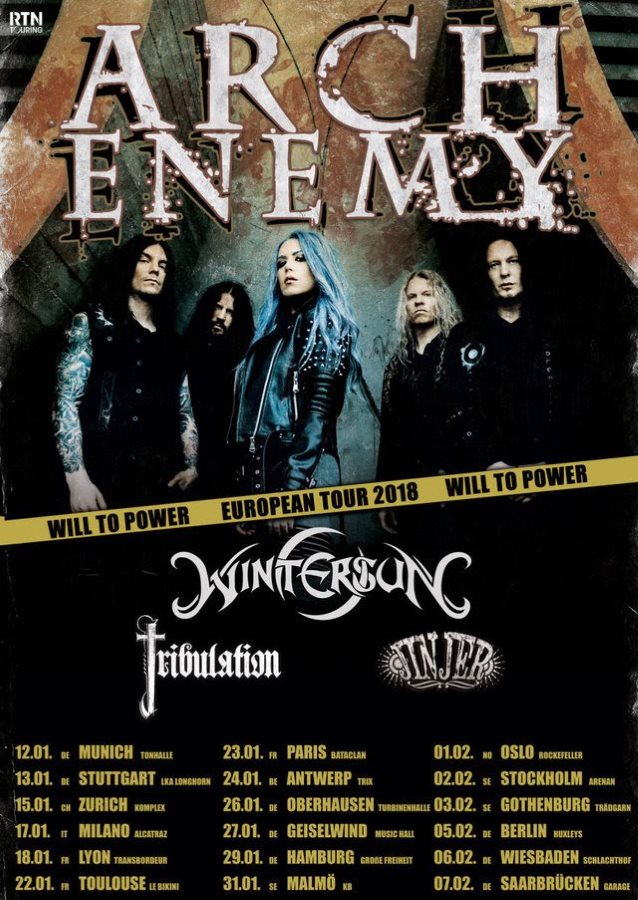