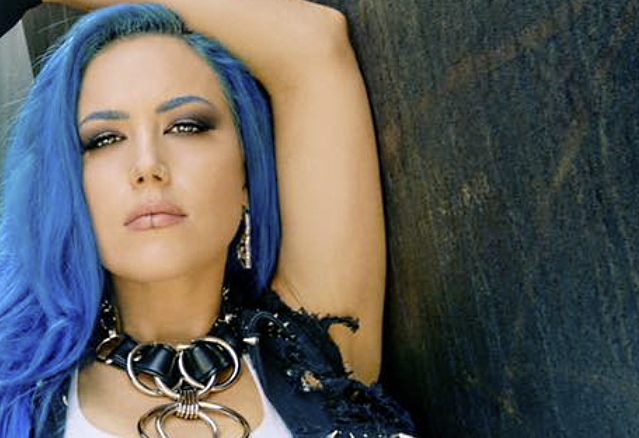 In a new interview with Mike McMahan of San Antonio Current, ARCH ENEMY singer Alissa White-Gluz spoke about whether there will be another wave of metal bands who are able to ascend to an arena-level status to take the place of METALLICA, IRON MAIDEN and JUDAS PRIEST upon their retirement. She said: "I was just talking about that yesterday, because I was with Nergal [BEHEMOTH frontman] and Michael [Amott, ARCH ENEMY guitarist] at the [Southern California stop of] 'The Bay Strikes Back' tour, which is TESTAMENT, EXODUS and DEATH ANGEL. We were talking about it, and there's a little bit of concern, actually, for what is going to step in as fantastic music. Even if you go a little bit beyond metal, AEROSMITH, let's say. Once these bands have to stop for whatever reason, ARCH ENEMY is right there waiting to step in. [Laughs] But there is a little bit of concern on my end. Not to say that modern music isn't fantastic, because it is. It's more that the consumption of music is less focused on the quality of the songwriting and the musicianship and the lyrics, and it's a little bit more focused on the virality of the song and made for a very short attention span. And that's not the fault of musicians. That's just the way world is. So, I'm a little concerned about maybe not having really excellent music in — let's say — 50 years."

She continued: "I'm a little worried that the era of bands might actually come to a close, because even the era of touring bands is not very old. If you read the Keith Richards biography, he talks about THE ROLLING STONES being one of the first touring bands, and I would hate to see that go away. I hope that there will be a renewed enthusiasm for live metal music. When I was watching the audience in that sold-out House Of Blues Anaheim show with 'The Bay Strikes Back', I was seeing everyone in the audience just loving it and having this spiritual moment in the crowd while EXODUS was playing.

A year ago, FOZZY singer and wrestling superstar Chris Jericho also expressed his concern about newer artists being able to headline arenas and festivals one day. He told YouTuber and music industry expert Rick Beato: "It's kind of scary. I was talking to Gene Simmons about this. I go to the Rock And Roll Hall Of Fame every year, and N.W.A. was on, and [they said], 'Everyone says that rap is dead,' or we say 'Rock is dead,' or whatever. And Gene said, 'Every type of music eventually dies.' And I was, like, 'What do you mean?' He's, like, 'Look at swing music and polka music and guys playing lutes by the fire. All of it kind of slowly goes away.' And I'm starting to wonder, was he right about rock and roll? Because when I was a kid, everybody was a in band. I remember jocks, I remember guys who were on the football team that bought a guitar and would come jam. Meanwhile, all the rockers, there was four or five bands in my high school alone. Now my son is 17, my twin daughters are 14. I don't know any of them who play music, or any of their friends.

"So the scary thing's this. I was talking to [U.K. concert promoter] Andy Copping on [my podcast] 'Talk Is Jericho' when Download got canceled in 2020, which is the biggest festival in England — a hundred thousand people. And I said to Andy, 'Who is going to be headlining Download in 10 years?' 'Cause now you can still rely on METALLICA and AC/DC and IRON MAIDEN and SYSTEM OF A DOWN reunited or FAITH NO MORE or those types of bands. AVENGED SEVENFOLD are building and SLIPKNOT. But who is the next generation of thise bands? Because with the exception of a GRETA VAN FLEET and THE STRUTS and a couple of others, there's not a lot of new rock and roll bands. Whereas before, there'd be 40 or 50 and you couldn't keep up with all of them."