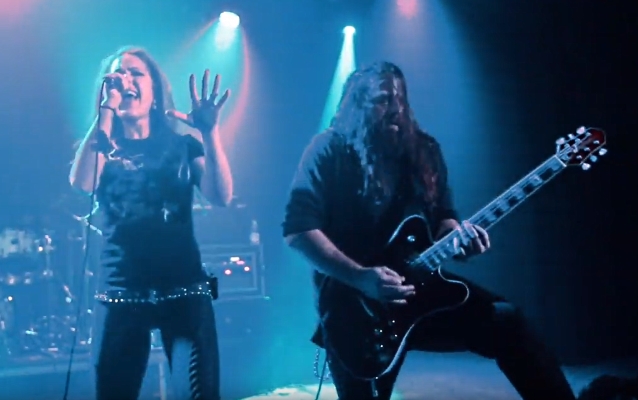 ARCH ENEMY singer Alissa White-Gluz joined LAMB OF GOD guitarist Mark Morton on stage this past Sunday night (March 17) in Montreal, Quebec, Canada to perform the song "The Truth Is Dead". Video footage of her appearance can be seen below.

Backing Morton on the tour in support of his debut solo album, "Anesthetic", are vocalist Mark Morales (SONS OF TEXAS),guitarist Doc Coyle (BAD WOLVES, ex-GOD FORBID),bassist Nick Villarreal (SONS OF TEXAS) and drummer Art Cruz (PRONG, Cruz and Coyle have both played with LAMB OF GOD in the past. Cruz filled in for LAMB OF GOD drummer Chris Adler on tour last year while Chris recovered from a motorcycle accident, and Coyle subbed for Morton when LAMB OF GOD opened for METALLICA in 2009.

Mark told Australia's Heavy magazine that he wanted Alissa to appear on "Anesthetic" because "it was important to me conceptually to have some women on this album. I didn't want it to be just a bunch of smelly dudes... I think it makes it more dynamic, and just kind of cooler."