S.O.D. are back on the bill for the upcoming Thrash Of The Titans benefit concert for TESTAMENT vocalist Chuck Billy (who was recently diagnosed with cancer) after S.O.D. bassist Danny Lilker, who was previously scheduled to perform at this year's Milwaukee Metalfest on the same day, had managed to 'become available' to take part in the show. As previously reported, Thrash Of The Titans is scheduled to take place on Saturday, August 11th at San Francisco's Maritime Hall, and it will include performances by ANTHRAX, EXODUS, M.O.D., DEATH ANGEL, VIO-LENCE, HEATHEN, and SADUS, among others.

Following LIMP BIZKIT frontman Fred Durst's remarks that he would 'hate to think that LIMP BIZKIT have had an influence' on bands like CRAZY TOWN, CT singer Shifty has hit back at Durst claiming that his harsh words are just sour grapes.

'The reason that he and the band are mad is because they tried to sign us to their record label,' Shifty explained to Worldpop. 'So now that we've had this huge success, they're intimidated, because they don't have control over us. And right now we have the capability of becoming bigger than them. Also, they don't get a check in the mail for every record we sell, which they would have had had they signed us. So it's kind of like we went from being an asset to an enemy which has obviously made them pretty angry.'

In related news, it appears that CRAZY TOWN are not the only ones to take offense at some of Durst's remarks. Former BIZKIT touring mate EMINEM has hit back at Fred and LIMP bandmate DJ Lethal for 'dissing' him in interviews in an unreleased track that was recently posted at eYada.com. In the song entitled 'Girls', the 'Slim Shady' reportedly states: 'Now I gotta grab my sh.t list and add a new enemy. … If I see you at a show I'll strip you naked.' The track can be heard in its entirety at this location.

JUDAS PRIEST management co-ordinator Jayne Andrews has addressed the issue of the seemingly negative and disrespectful remarks made by current JP frontman Tim 'Ripper' Owens about his predecessor, Rob Halford, in an interview conducted on a recent promotional tour in Greece (which can be read in its entirety at www.metal-temple.com). In response to the complaints by irate PRIEST and HALFORD fans who deemed Owens' remarks inappropriate and reeking of arrogance, Andrews has stated that 'unfortunately, things were taken very much out of context to make it look like Ripper was saying bad things about Rob. I can assure you this was not the case. I was with Ripper in Greece and there is no way at all that he bad-mouthed Rob. Ripper is a big fan of Rob's and would not do this. Maybe the language barrier, maybe 'journalistic license', but Ripper's words were taken out of context and made to sound bad. The rest of the guys would not condone this in any way, and I have only ever heard Ripper say good things about Rob. Rob and I have discussed the situation, and he is aware that no malice was intended — he knows how difficult it is with some journalists who are just looking for a bit of sensationalism. However, we totally agree that it reads pretty badly, and we apologize, but unfortunately cannot control what a journalist writes.'

Sure, Jayne, it's always the journalist's fault. Interestingly enough, Rob never gets 'misquoted' making similar statements about Tim. Coincidence? You be the judge.

MEGADETH's The World Needs A Hero shifted approximately 25,000 copies in its second week of release in the US (landing the group at position #59 on next week's Billboard Pop Album chart),a drop that mainman Dave Mustaine has attributed 'to the formula that with almost every record released, you drop 60% in sales your second week. We are very pleased that it was in line with the formula, because we all know it could've been worse.'

In other MEGADETH news, Mustaine has revealed the provisional set list for the group's upcoming 45-minute performance with AC/DC at the National Bowl in Milton Keynes, England on June 8th. 'Barring any unforeseen problems,' this will be MEGADETH's set list for the day:

01. Dread and the Fugitive Mind

As reported here yesterday, STAIND's Break The Cycle CD will debut at #1 on next week's Billboard Pop Album chart, having shifted 716,000 copies in its first week of release. Meanwhile, several high-profile debuts made their mark, with STATIC-X's Machine leading the pack at #11 with 81,000 copies sold, while STEREOMUD's Perfect Self and SYSTEMATIC's Somewhere In Between landed at #142 and #143, respectively, having sold approximately 10,000 copies apiece. TOOL's Lateralus, which debuted at #1 last week with sales of 555,000, has dropped down to the #2 slot with sales of 198,000, while MUDVAYNE's L.D. 50 continues to make impressive inroads, having shifted in excess of 300,000 copies so far, virtually ensuring the group a gold certification for the CD within the next 4-6 weeks.

After spending three weeks rehearsing in pre-production with producer Ross Hogarth (of MOTLEY CRUE and JOHN COUGAR MELLENCAMP fame),COAL CHAMBER officially started the recording of their third full-length CD, tentatively titled Dark Days, at Rumbo Recorders Studio in Canoga Park, California on Tuesday, May 29th. The band expects to have the recording wrapped up by the first week of July for a tentative October 9th release through Roadrunner Records.

SLIPKNOT's 'Heretic Song', which appears on the masked band's forthcoming Iowa CD (due for release August 7th),will be available for download via the Roadrunner Records web site tonight, May 31st, at the stroke of midnight in Iowa (Central Daylight Time),1:00 AM Eastern Daylight Time, 7:00 AM Central European Time.

More GUNS N' ROSES re-scheduled dates are trickling in. Here are the confirmed shows so far:

Portugal's MOONSPELL have been added to the list of bands performing at the Mind Over Matter Festival in Vienna, Austria on Saturday, June 9th.

C.O.C. drummer Jimmy Bower reportedly had to get stitches on his hand as a result of an injury he suffered after the group's recent performance in Adelaide, Australia.

ENGINE, featuring FATES WARNING vocalist Ray Alder and ex-AGENT STEEL guitarist Bernie Versailles, will have their track 'Monster' (off the group's self-titled debut) used as the intro song for the new vampire movie The Forsaken.

IN FLAMES' upcoming live album, The Tokyo Showdown, recorded live in Japan during the 2000 tour, will be released on August 2nd. IN FLAMES is scheduled to perform at the annual Göteborgs Kalaset, in Gothenburg, Sweden, where they will headline the stage on Heden on August 6th. This will be the group's last show in Gothenburg (and possibly Sweden) until late next year, after the release of a new IN FLAMES studio album.

SAXON have been added to the bill of the 5th Fat Tire Open Air Festival in Laax Plaun Switzerland on Saturday, August 18th. The location of this show is 'on a very nice alp' at 1500 meters above sea level (stage in tent!). Fat Tire Openair Festival is the biggest annual Harley Davidson meeting in Switzerland.

Moving Media &amp Arts will be publishing a new book on IRON MAIDEN, authored by Marco Gamba &amp Nicola Visintini, later this summer. Containing 416 full-color pages, the book will be the 'proper' follow-up to the authors' IRON MAIDEN Collectibles Book, which was published in 1997, and it will reportedly be the definitive bible for the MAIDEN collector, including more than 2000 full-color photos and listings of all of the albums, singles, compilation, home videos, tour books, tour set lists, tour t-shirts, etc. You can pre-order the book via [email protected]

Contrary to previous reports, it now appears that former DRAIN STH guitarist Flavia will NOT be making a backstage appearance with ex-DRAIN STH singer Maria Sjoholm at the Ozzfest stop at the Nissan Pavilion in Bristow, Virginia on July 20th.

Swedish all-girl outfit MISDEMEANOR (who are signed to ENTOMBED guitarist Alex Hellid's Muse Entities record label) are due to perform at a June 9th party for a brand new record company, Bigbongo Records, at Stockholm's Kafé 44 Club. Also playing at the party will be THE SEWERGROOVES, THE DONTCARES and COYOTE.

STONE TEMPLE PILOTS have joined the likes of FEAR FACTORY, FOO FIGHTERS, QUEENS OF THE STONE AGE, SNAPCASE, and BACKYARD BABIES on the list of bands performing at the Bizarre Festival, which is scheduled to take place August 17-19 in Weeze, Germany.

BLACKMORE'S NIGHT, featuring former DEEP PURPLE/RAINBOW guitarist Ritchie Blackmore and his 'companion' Candice Night, have lined up several German shows in support of the act's Fires At Midnight CD, which is due for release through SPV/Steamhammer Records in Europe on July 2nd. The dates are as follows:

ONE MINUTE SILENCE will be headlining the Total Fest 2 Festival, which will be held at the Kings Head, Fulham, London on June 16th. Other bands on the bill include MIOCENE, CHARGER, VACANT STARE and SILVA. The event will be broadcast live on Total Rock radio, which is available over the Internet on www.totalrock.com.

Nuclear Blast Records will shortly be re-issuing three 'classic' albums from Toronto's SLAUGHTER (not to be confused with the Mark Slaughter-led cock rock mob): Strappado, Paranormal and Not Dead Yet.

WISDOM CALL, the side project of NARNIA singer Christian Liljegren, will perform its debut gig in support of the group's just-released self-titled debut on August 11th at AG-Rocken 2001 Festival in Flen, Sweden.

HOUWITSER's previously-unreleased cover version of POSSESSED's 'March To Die' (which was intended for a never-released POSSESSED tribute album) will be issued on a 7' single through Displeased Records backed with a demo version of ''Shredded to Pieces''. 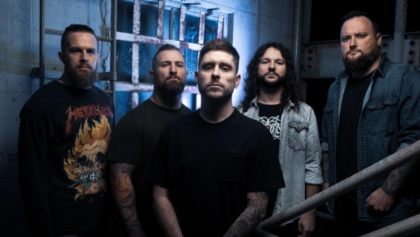