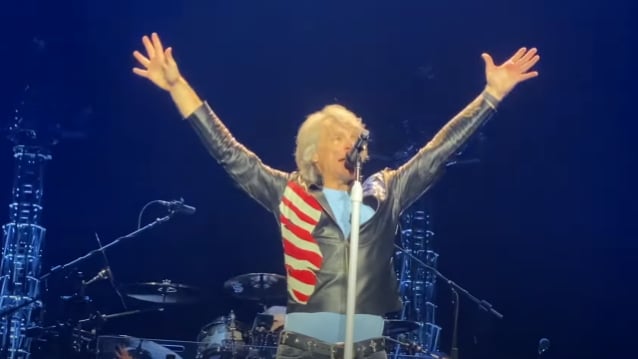 Jon Bon Jovi, who has never been known as a particularly technical singer, has been receiving scathing reviews for his performances during BON JOVI's current U.S. tour which kicked off April 2 in Omaha, Nebraska. The tour is in support of the album "2020", which was released in October of that year.

In his review of BON JOVI's April 3 concert at Xcel Energy Center in Saint Paul, Minnesota, Ross Raihala of the Pioneer Press called Jon's vocals "shockingly poor," adding that Bon Jovi "struggled throughout the two-plus-hour show. He wasn't just butchering the older stuff, which the band now plays in a lower key, but the fresh material as well… Quite frankly, it felt like he had forgotten how to sing."

Théoden Janes of The Charlotte Observer was a bit kinder in his assessment of Jon's voice at the fourth concert on the new tour, which came to Spectrum Center in Charlotte, North Carolina on April 8. In his review of the performance, Janes wrote: "Throughout the band's rendition of 2004 promo single 'The Radio Saved My Life Tonight', it felt like [Jon] was searching for the right note and only finding it 60 to 70% of the time. During every chorus of megahit 'You Give Love A Bad Name', he seemed to unintentionally be singing a little behind the beat, and on top of that, there wasn't much punch to his vocals — yet he inexplicably seemed somewhat out of breath in spots. On another big anthem — 'It's My Life' — he once again was quite clearly veering into and out of key. And those were just three out of the first five songs."

Kevin Coffey reviewed BON JOVI's tour kick-off concert for Omaha World-Herald and noted that "[Jon's] voice's heft, which carried choruses of songs like 'Livin' On a Prayer' and 'It's My Life' is now reedy. He sounds thin. There's not a lot of tone in his voice. He can't quite hit the notes… Luckily for Jon Bon Jovi, he had the help of six additional musicians and their considerable vocal abilities to keep him afloat."

After BON JOVI's summer 2020 tour was canceled due to the COVID-19 pandemic, the now-60-year-old singer remained in the public eye by performing at benefit shows, livestreamed gigs and taking part in promotional appearances.

Last October, Jon Bon Jovi canceled his appearance at a Miami Beach concert after testing positive for COVID-19, the disease caused by the novel coronavirus. The singer, who is said to be fully vaccinated, pulled out of the fan event minutes before he was supposed to take the stage for an acoustic Halloween performance at the Loews South Beach.

@bonjovi I’ve never walked out of a concert in my life. Until tonight. Good lord that was painful. Jon has lost it - vocals were painful.

I cant defend @jonbonjovi any more …… man your vocals are embarrassingly bad and you need to stop now …… #BonJovi .

Absolutely adore the guy and absolutely agree. Richie carried a lot of the vocals previously and I’m not sure why they haven’t gotten some better backing vocal support for JBJ since RS quit

Watching the videos of this current Bon Jovi tour has me wondering if I've seen them for the last time. I just can't imagine another tour with Jon's vocals in this state. It makes me sad, really.

You know why Jon Bon Jovi sounds like this? Richie Sambora carried his vocals in the background for years & covered for him as Jon started to lose his voice. Another reason why Richie left was he was doing way to much work, got burned out & exhausted. Been a fan since the start.

The videos from the Bon Jovi shows are hard to watch. I love the band and always will but Jon is really struggling. I really wish him and Richie could sort things out and Richie could help on vocals. This doesn’t mean I’m not a true fan, it’s just been realistic to the situation

I saw him in Omaha on Friday night & was absolutely shocked. I am a huge fan & this was my third time seeing the band in concert. I love Jon Bon Jovi, but his vocals were awful. Considering the price we paid for our tickets, it was a huge disappointment.