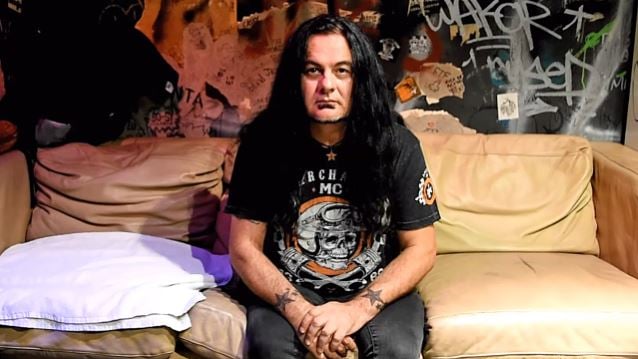 Metal Wani's Fernando Bonenfant conducted an interview with ARMORED SAINT guitarist Jeff Duncan on July 14 at The Underworld in London, England. You can now watch the chat below.

Asked for his thoughts on people filming concerts using their mobile phones and texting while the band is performing on stage, Jeff said: "Well, yeah, that can be annoying, especially when you've got a guy with his phone, and you're performing, and there's a guy with his phone right in front of you like this [holds up his hand], it can be very distracting. I think, for them, it ruins their concert experience. 'Cause before cell phones and all that… I mean, I remember the first concert I ever saw — it was 1978; I saw KISS. I didn't have a cell phone, I didn't have anything like that, but I remember it; it's a great memory. So I don't think it's necessary to do that. You'll remember the concert. And I'd rather experience the show than be nostalgic about a little while ago. It doesn't really make sense."

He continued: "If somebody is texting or something, and doing that right in front of me at a show, I'll usually let 'em know that I see them. I'll throw a pick at them or something like that. 'Hi!' You know, I think it can be rude sometimes. But that's the day and age that we live in. But, no, I don't like it; I don't like it at all."

ARMORED SAINT is making several European festival and club appearances this month before concluding its world tour this fall in Japan at the Loud Park festival.