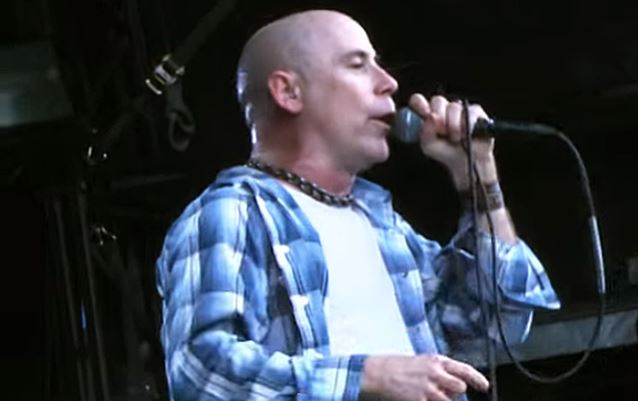 Professionally filmed video footage of ARMORED SAINT performing the song "Reign Of Fire" at this year's Bloodstock Open Air festival, which was held August 6-9 at at Catton Park, Derbyshire, United Kingdom, can be seen below.

Asked how he stays in shape for the road, ARMORED SAINT singer John Bush told The Front Row Report: "Vocally, it's a challenge. I'm 52 years old, and singing 'Raising Fear' when I was 24 was… you know, a long time ago. So I try to change things up a little bit, although, of course, I wanna sound as true as possible to the original recordings. I've had some vocal troubles prior to this tour [with SAXON] starting, and I was quite concerned, actually, but I seem to be coming out of it, luckily. Being a singer is kind of annoying; you know, you can't… you've gotta take care of yourself. You're not the bass player, and nothing against bass players, but it's a different type of working. This [points to throat] is your instrument, it's in body, so I kind of try to eliminate coffee, which is a drag, 'cause I love coffee. I try to not eat any spicy foods. I take antacids, because it helps with reflux. And [I] just really [try to] be meticulous about working with my voice. I haven't drank anything for a while, but I still like to drink, and I wanna drink, and as soon as this tour is over, I will. But, yeah, just taking care of yourself. I didn't always do that in the early days of ARMORED SAINT and even in my days with ANTHRAX. I probably am, vocally, in the best health of my life."

Regarding his views on illegal music downloading, Bush said: "I think it's important to buy records. I still try to go to a record store, Amoeba in L.A., and purchase records. I don't know… You can't walk into a 7-11 and steal a Butterfinger. Why should you get music for free? This is what people do to earn a living. So I don't understand that. Stream music… that's fine. Tape trading, things like that, to turn people on, fine. But I still purchase records. I just bought the last FAITH NO MORE record. I wanna buy records. So this is how you earn a living. If you don't do that, then there won't be any more bands. Look, what does a CD cost? 15 bucks? It's like four Frappuccinos for you and your buddies, which people will buy at Starbucks every day. So just buy records, buy t-shirts. I think that you have to kind of give some money to bands so they can continue making music and be bands. You know, to stream music, to hear stuff to see whether or not you wanna buy it, I totally understand that, 'cause I do that. I'll go to iTunes, or wherever, and I'll check out a band I've heard of, and if I don't like it, then I may not invest the money, but if I like it, then I'll go buy the record."