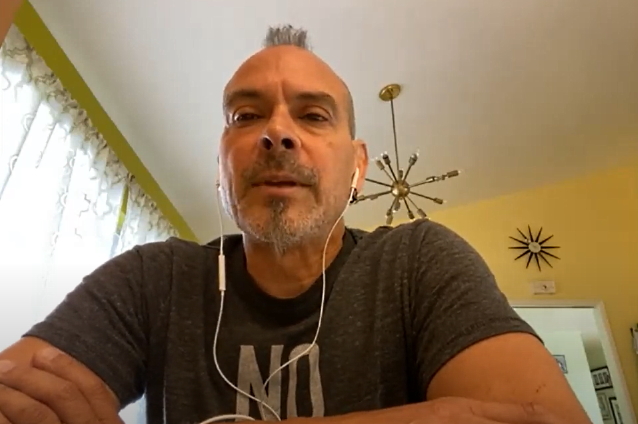 ARMORED SAINT's JOEY VERA On His Friend MIKE HOWE's Suicide: 'I Had No Idea That He Was Suffering'

ARMORED SAINT's Joey Vera has reflected on the recent passing of Mike Howe, saying the METAL CHURCH singer was "a sweet guy" who "never had a mean thing to say about anybody."

Vera discussed Howe's passing during a recent interview with "I Ask No One With Kevin Re LoVullo". He said (as transcribed by BLABBERMOUTH.NET): "As many people have probably read about him, he was just a sweet guy. We were on tour with them a few different times in the last seven years or so — a great band to tour with, METAL CHURCH — and no matter what you were doing during the day, we were on tour and it's the daily grind and it's the same thing over and over and soundchecks and sometimes a shitty venue or it's cold and you're sick and tired… Touring is not easy, it's not for everybody, but you could always count on Mike to crack a smile for you. And he would have this way of just kind of lifting your spirits about no matter what was going on in your day that day. And so that's a testament to his personality and his heart. He was a great guy. And I always kind of counted on that from him, and I appreciated it. I had lot of time hanging out with him. He was often hanging out with us. He wasn't so much of a partier or a drinker, really, but he would still like to spend time with us and hang out with us. In fact, I think one tour we shared a bus together and it was just great times being able to just sit with him and hang out and chat about bullshit — sometimes talk politics or sometimes we would talk about nothing. And he never had a mean thing to say about anybody. And he was just an awesome guy. And he sadly will be missed.

"To be honest with you, I really had no idea that he was suffering with anything mentally; I really didn't know," Joey continued. "It wasn't something he talked about. I was just flabbergasted when I heard the news, as I think most of us are.

"Everyone says the same thing — I wish he would have reached out and I could have helped him somehow or said something, and maybe it would have changed it. Everybody wants to say that and feel that.

"I don't know much about mental illness and I don't have that much experience with it, but I know it's very real and I know it's a very difficult thing. It's harder for a lot of us who don't understand it to really grasp it. And for people that are suffering, I know that they see no way out, and it's a very difficult thing for them to go through… But we want people to stop and take a deep breath and just reach out to someone and say something. It could be the slightest little question, but it could make all the difference."

TMZ stated that cops in Eureka got a call just after 10 a.m. on July 26 reporting an unexpected death at a home. By the time deputies arrived, they found Howe dead at the scene.

Last month, Vera's ARMORED SAINT bandmate John Bush told "I Ask No One With Kevin Re LoVullo" that he "couldn't believe" it when he heard the news about Mike passing away. "We had just [done] a tour with METAL CHURCH not too long ago — we went to play a bunch of dates in Europe with METAL CHURCH, some festivals as well as a lot of headline shows together," he said. "And we did some shows out here in America as well on the West Coast — we played Portland, Seattle, San Francisco and L.A. And Mike was just an incredible singer — powerful voice, great vibe.

"I'm still pretty flabbergasted about his passing; I just can't believe it," he continued. "We shared a bus recently, and we did a bunch of interviews together 'cause people wanted to interview the two singers when we were on tour together. I'm really bummed about that one. I don't know what to say.

"I've heard that he took his own life, and, man, I wish he would have just called me. 'Cause we did chat after the tour. He has his older son. I think his son was playing college football, and he was super proud of his kids. That one really, really hits me hard.

"Mike was one of those guys — he was just a nice man; he was just a good guy," John added. "In the music business, you meet a lot of pricks — in bands and out of bands and agents and managers, whatever. But he was a good guy. He was a really nice guy and a genuine person. And that one really bugs me."