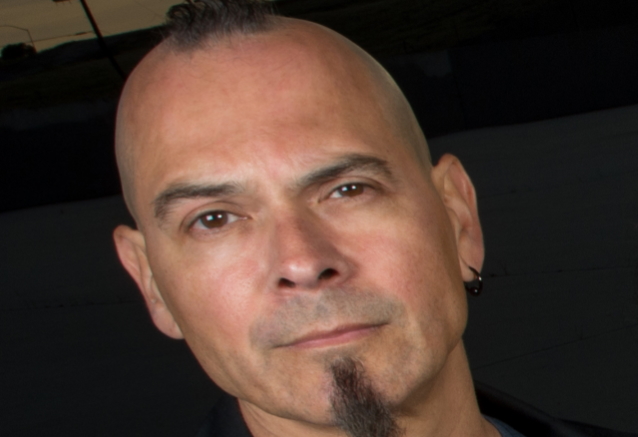 In a recent interview with Matt Coe of Dead Rhetoric, ARMORED SAINT bassist Joey Vera was asked how he planned to juggle the proposed 2021 touring responsibilities between ARMORED SAINT and reformed Danish metal legends MERCYFUL FATE. In 2019, it was announced Vera would be replacing original MERCYFUL FATE bassist Timi Hansen for the band's summer 2020 European festival appearances due to Hansen's cancer diagnosis. Hansen passed away last November and MERCYFUL FATE's 2020 summer festival appearances have since been rescheduled for 2021.

"[That] is a very good question, and I don't have an answer for that," Joey said. "I just hope it can all work out, I don't want to piss anyone off, and if it can work within reasonable schedules I will certainly make every effort to make everyone happy. I know that you can't always do that, so I'm prepared to cross those bridges when I get there.

"I've been friends with [MERCYFUL FATE vocalist] King [Diamond] for some time," he continued. "ARMORED SAINT did a tour with King back in 1988-89; we have been friends and labelmates forever. And so, he came to see me when I was on tour with FATES WARNING supporting QUEENSRŸCHE in Dallas where he lives. He came to see the show. [Metal Blade Records owner] Brian Slagel was in town. King pulled me aside backstage and told me the story of Timi going through chemotherapy and had a summer tour booked and wasn't sure he was going to be well enough to do it. If he wasn't, would I consider stepping in and helping out. Of course, I was flabbergasted and honored, yeah. I didn't have anything else going on — it was supposed to happen this summer. To honor Timi and help them out, thank you for asking me.

"In the back of my mind, I was thinking Timi would pull through, he would get enough energy to make it," Joey added. "I was sadly mistaken and it was devastating. They still wanted to do these dates and I said, 'Of course.' Then COVID hit and it got canceled until next year. We'll see if it actually happens. It seems like we will have some kind of medical breakthrough before the end of the year comes around, but the jury is still out on customer confidence and attendance as far as who will go to a show. How many people are still going to feel confident after getting a vaccine? Are promoters and artists going to be willing to take a hit? I really don't know what's going to happen. I was already learning halfway through the set and I have to go back to refreshing my memory and learning the set."

You can read the interview at Dead Rhetoric.