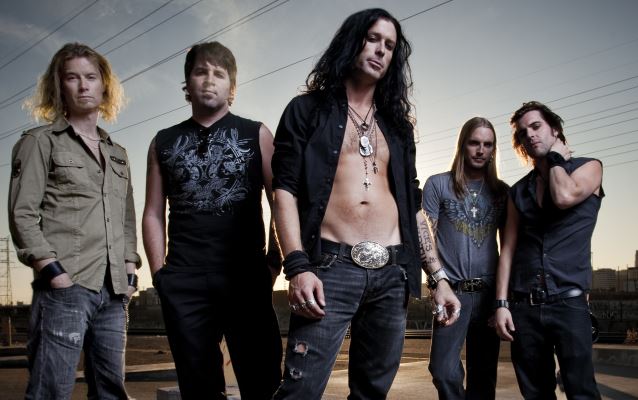 Though the members of ART OF DYING are Canadian, the epicenter of the band's success has been in the U.S., with their album "Vices And Virtues" (2011, Reprise/Intoxication) spawning the hit singles "Die Trying" and "Get Thru This", both of which charted on U.S. mainstream, rock and alternative radio, and contributed to the band selling over 250,000 digital singles and 50,000 records.

"It's an honor to become label mates with FIVE FINGER DEATH PUNCH, PAPA ROACH and MÖTLEY CRÜE, bands that have inspired us over the years.

"Eleven Seven's passion for rock is fierce which is exactly the kind of energy that ART OF DYING fans have come to expect."

He adds: "I can't tell you how excited we are about the new music! Making this album was one of the most intense experiences we've ever been through, so we kept things pretty tight lipped in order to focus all of our energy into every lyric, note and beat of the creative process.

"We've seen all of the calls for new music coming in from our fans on our social media channels, and now I'm thrilled to say the record is done, and the wait is almost over!

Kovac states: "Having come off a #1 rock single and making their first album for Eleven Seven produced by David Bendeth, we are exceptionally lucky to have ART OF DYING join our roster."

Find more on Art of dying