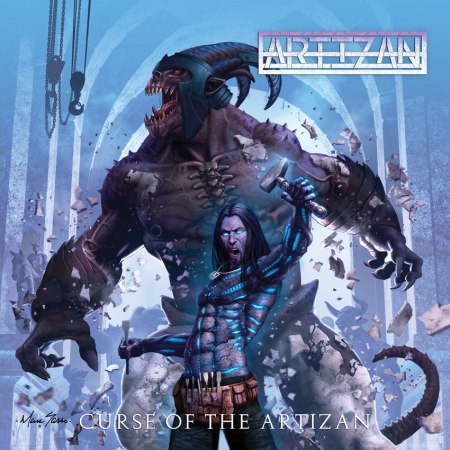 U.S. melodic metal act ARTIZAN has set April 29 as the release date for its full-length debut, "Curse Of The Artizan", via the German label Pure Steel Records. The CD was recorded with legendary producer Jim Morris, who has previously worked with ICED EARTH, DEATH, CANNIBAL CORPSE and JAG PANZER, among many others.

Fantasy artist Marc Sasso (DIO, HALFORD) has created characters based on the conceptual idea of the album's title track, "Curse Of The Artizan". The album contains an intro track to "Curse Of The Artizan" titled "Torment", which illustrates the Artizan as a child being bullied and ostracized. As the Artizan matures, he discovers he was born with a gift to sculpt and paint characters which come to life and seek retribution on those that were cruel to him. In the CD artwork we see a beast that he has sculpted from granite that is coming to life and breaking free. The beast will soon be delivering vengeance to those who scarred the Artizan.

ARTIZAN drummer Ty Tammeus will be at this year's Keep it True festival to promote the CD release. The annual event will be held April 29-30 at Tauberfrankenhalle in Lauda-Königshofen, Germany.

Audio samples are available for streaming on the band's Facebook page.

ARTIZAN, hailing from Jacksonville, Florida, was formed by original members of the acclaimed Century Media recording artist LEVIATHAN, and released its self-titled debut EP in late 2009. With a strong resemblance to such great bands as IRON MAIDEN, QUEENSRŸCHE, FATES WARNING and CRIMSON GLORY, ARTIZAN is undoubtedly one of the best exponents of what classic heavy metal is all about.