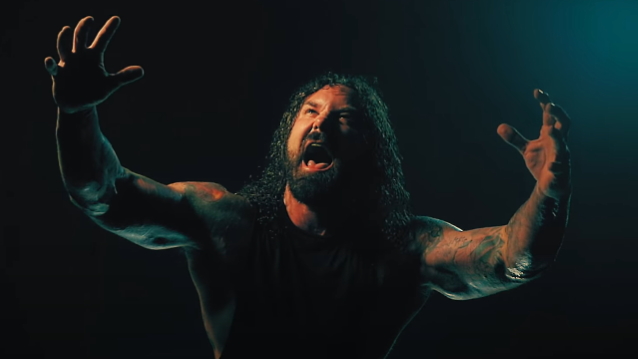 Lambesis stated about the track, which features Devin Attard on drums and Taylor Adsit on additional vocals: "'Blood Fire Pain' is inspired by someone I met while incarcerated. After hearing his story, I couldn't help but be moved by his positivity despite the fact that all he had known his entire life was hardship and suffering. He had grown up in one of California's toughest neighborhoods and fought to survive the gang life he was born into. When he was 15, he was ordered to commit an armed robbery. In that moment, he had to decide if he was more scared of the police or older gang leaders who he'd have to answer to if he didn't do it. Though he forever regrets his decision that day, he was given an adult sentence back in an era when the prosecuting attorney (rather than judge or jury) decided that.

"I met him around age 32 when he'd spent almost two decades in prison. He had endured level four prison yards, gang wars, isolation, riots, and countless lockdowns. Despite the struggles of his childhood followed by fighting to survive as an adult, he believed there was hope.

"This song is dedicated to people who feel their pain goes unseen or that they are forgotten and swept aside."

Earlier in the month, BORN THROUGH FIRE released its first two songs, "Reintroduction" and "Bone By Bone", via Modern Music Empire.

Lambesis stated about the musical direction of the group, on which he has apparently collaborated with WOLVES AT THE GATE guitarist Joey Alarcon: "The best description of the material that I've heard from a close friend who has heard it is this… It's cinematic, heavy, and modern, but it still has classic metal throwback elements at the same time."

The BORN THROUGH FIRE launch came six months after Lambesis was sued by a woman who claimed she suffered second-degree burns when he sprayed a flammable liquid into a fire pit at his parents' house at the end of last year. Tim himself sustained burns to 25 percent of his body in the incident, which he first revealed in an Instagram post on December 16, 2020. At the time, the 40-year-old singer claimed that he was pouring gas into a bonfire when the top slipped off and the liquid ended up getting all over his clothes. He later said that he lost 20 pounds from being bedridden for almost three weeks and suffered some nerve damage. He also assured fans that his "man parts" were not harmed during the incident.