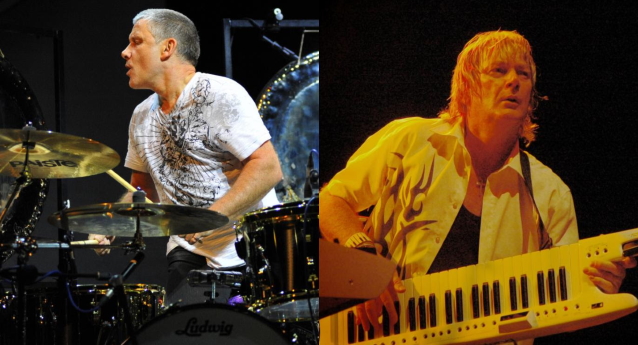 ASIA, one of the greatest and best-loved supergroups to emerge during the 1980s, is currently preparing for an extensive 40th-anniversary celebration, due to kick off in summer 2022. Featuring founding members Carl Palmer (ELP, CRAZY WORLD OF ARTHUR BROWN) and Geoff Downes (YES, THE BUGGLES),the group will also include longtime bassist/ vocalist Billy Sherwood (YES) and newest member, guitarist/ lead vocalist Marc Bonilla, (solo artist, KEITH EMERSON BAND). The band is currently being booked for a U.S. tour to start late summer this year.

"40 years of ASIA is a real musical milestone for us," says Downes. "The success we experienced with our early albums has carried us through and gave us the foundation when we reformed in 2006. ASIA has been together ever since, although we lost John in 2017 to cancer. Still, we have endured and will carry on now with Marc Bonilla, who we know will be a great addition to the band."

"The fans have never left ASIA," says Palmer. "That first ASIA album with all those radio and MTV hits weaved the fabric of the music scene in the early 1980s. Those great songs like 'Heat Of The Moment', 'Sole Survivor' and 'Only Time Will Tell' still hold up today. When we play those songs and our other hits, we can see the entire audience singing along."

Downes, Steve Howe (YES, guitars),Palmer and John Wetton (KING CRIMSON, UK, bass/vocals),took the world by storm with ASIA's eponymous debut album, globally the biggest-selling album of 1982, and the single "Heat Of The Moment". ASIA was a true "supergroup", pooling the talents of its four members who had already amassed tens of millions of record sales with their collective bands of the 1970s. Leaving behind their progressive roots, ASIA embraced the commercial FM rock sound that dominated U.S. airwaves and took that, and the new MTV video channel, by storm. The single "Heat Of The Moment" was a worldwide monster smash and their eponymous 1982 debut album spent an incredible nine weeks at No. 1 on the Billboard chart as ASIA became the biggest-selling album of the year and world tour dates sold out.

A second album, "Alpha", was released in 1983, followed by "Astra" in 1985. The four original members reconvened in 2006 for a world tour, to celebrate the 25th anniversary of that incredible success, and the album "Phoenix" followed. While the members were still heavily involved in other projects, they came together again to record "Omega" in 2010 and "XXX" in 2012, both albums were acclaimed by their faithful fans and supported by more world tours. Howe stepped back from ASIA to concentrate on his work with YES and was absent for 2014's "Gravitas". Following this tour came the news of Wetton's treatment for cancer, a fight he sadly lost in 2017. ASIA was special guest of JOURNEY for an extensive U.S. tour in 2017, and in 2019 the band hit the road with YES for the "Royal Affair" tour.

"We are planning an extensive tour to celebrate our 40th," adds Downes, "and the music will feature all the hits the fans have embraced. Stay tuned! It will be show you won't want to miss."