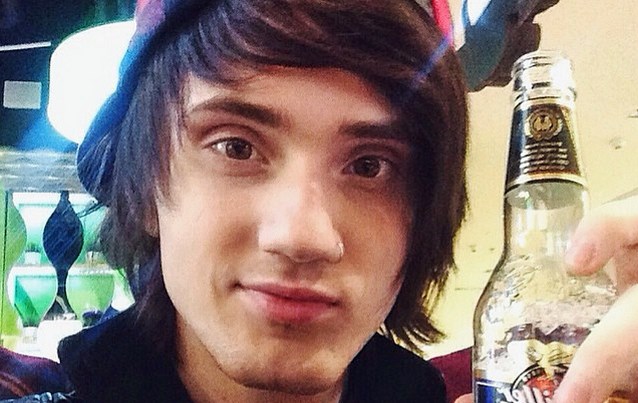 Denis Shaforostov (pictured),formerly of Ukrainian metalcore act MAKE ME FAMOUS, has been confirmed as the new singer of ASKING ALEXANDRIA.

A new ASKING ALEXANDRIA song, "I Won't Give In", featuring Shaforostov, can be streamed in the YouTube clip below.

In the new issue of U.K.'s Kerrang! magazine, ASKING ALEXANDRIA guitarist Ben Bruce stated about the band's new addition: "Everyone guessed it was Denis, and I think they did so because they know Denis was the right choice to make. He's an incredibly talented vocalist, from the multiple wide range of screams that ASKING ALEXANDRIA obviously needs and will continue to have, and his singing and range is out of this world. He's been a fan of the band for a long time, so he's familiar with all our old songs, and he really cares about the band. He's a passionate, cool guy; it's the perfect scenario."

Added Denis: "I had this gut feeling, man; I totally felt something big was going to happen right before the guys reached out to me. It's crazy. Honestly, I've never been waiting for such an opportunity to ever knock at my door but, as the same time, I was always ready for it. Without a doubt, I was extremely stoked and I poured all of my emotions into the writing for the new ASKING ALEXANDRIA record."

MAKE ME FAMOUS was stylistically similar to ASKING ALEXANDRIA, to the extent that they were at times accused of copying the British act's sound.

The day before singer Danny Worsnop announced his departure from ASKING ALEXANDRIA in January, Shaforostov posted the following message to Instagram: "There's such thing as karma and magic in this world. The hardest work will always pay off no matter how many of these fucks have ever tried to bring you down on your way. You never know when and how but trust me, your door will open and the future will be yours for the taking — just wait and see."

Worsnop revealed he was exiting ASKING ALEXANDRIA on January 22, explaining in a statement: "Over the last eight years together, we've done some amazing things and created something truly special. I now, same as then, want what's best for the band and at this point in time, that isn't me. ASKING ALEXANDRIA will continue to tour throughout the year and will be working on a new album."

Ben Bruce wrote at the band's Facebook page, "ASKING ALEXANDRIA will not be slowing down. We are going to tour harder than ever and we are going to write the greatest record of our career . . . This isn't the end, this is the start of a whole new chapter. This is where we come together and make history."

Worsnop's other band, WE ARE HARLOT, released its self-titled debut album on March 31.

Worsnop admitted last year to Kerrang! magazine that his involvement with WE ARE HARLOT had caused some friction with the members of ASKING ALEXANDRIA, saying, "Back when it started, there were maybe concerns and stress and bitterness from the guys. But over time they've realized that it's not detrimental to ASKING in any way."