As a harbinger to ASTRIAAL's return show at Monstrothic (Rosies Live) this coming Friday night (February 19),the Brisbane extremists have announced that Cameron Grant (pictured below) will fill the long-vacated bass position and debut live with the band at their show in Brisbane.

Cameron is a founding member with Nuclear Blast-signed Tasmanian tech-death fiends PSYCROPTIC, and has performed on all four of their studio releases to date and completed numerous international tours with the band.

The addition of Cameron Grant will bring a new ferocity to ASTRIAAL and continue their return out of self-imposed exile, with the long-awaited follow-up to "Renascent Misanthropy", "Anatomy of the Infinite", due for release in autumn 2010 through Obsidian Records.

Sounding strikingly different to the band's debut full-length, "Renascent Misanthropy", in production, tone and song structure, "Anatomy Of The Infinite" was recorded at various studios within Australia and mixed at Mølla Lydstudio in Norway with Knut Magne Valle (ARCTURUS). Featuring eight tracks comprising of haunting and dissonant passages interwoven with moments of epic black metal grandeur, the CD resonates with a more primeval, organic musicality throughout.

"Anatomy Of The Infinite" track listing:

The song "Foundations In Flesh" can be heard at ASTRIAAL's MySpace page. 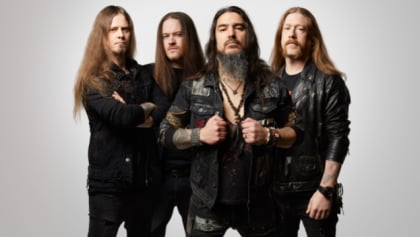