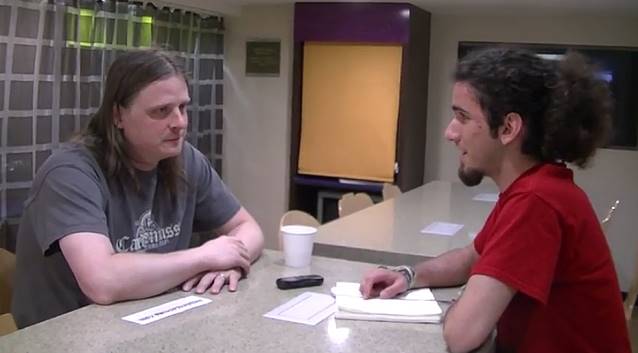 AT THE GATES Bassist JONAS BJÖRLER Talks To MetalRecusants.com (Video)

Dom of MetalRecusants.com conducted an interview with bassist Jonas Björler of seminal Swedish metallers AT THE GATES on May 24 at the Maryland Deathfest in Baltimore. You can now watch the chat below.

AT THE GATES is preparing to enter Studio Fredman in Gothenburg to begin recording its much-anticipated comeback studio album, "At War With Reality", for a tentative October/November release via Century Media. The CD will be mixed at Fascination Street Studios in Örebro, Sweden with Jens Bogren (OPETH, KATATONIA, SOILWORK, PARADISE LOST, KREATOR).

In a recent interview with Noisey, AT THE GATES singer Tomas Lindberg said about the songwriting process for "At War With Reality": "With this album, there was really two ways we could go into it. We could be really calculating and go, 'Oh shit, this is really important. People are gonna really expect a lot. This is the most important album we've done.' We could go into that way and overthink everything, and we're still very meticulous about all the details, of course, but the other way would be just to go wherever the thing takes us. It sounds very cosmic or philosophical, but the music is out there. You just need the fucking medium to get it out to the people."

He added: "We really just fed off each other during the whole process. I mean, this album has been in all our heads the whole time since we first started working on it. There was always an idea the whole time. A small part, and then we'd say, 'Oh yeah, that's the whole song. Let's do that!' We're all in the process, and we're all focused, so when I'd get an idea, it might be too crazy, but these two guys [bassist Jonas Björler and guitarist Anders Björler] can put in the right place."

Lindberg told Decibel magazine about what happened to change the bandmembers' minds about making a new CD in the six years since the AT THE GATES reunion was first announced: "I think a lot happened, mentally, when we decided to continue touring. When we started to do the global thing in 2011. That whole idea of being an active band, touring and hanging out, just grew on us, I guess.