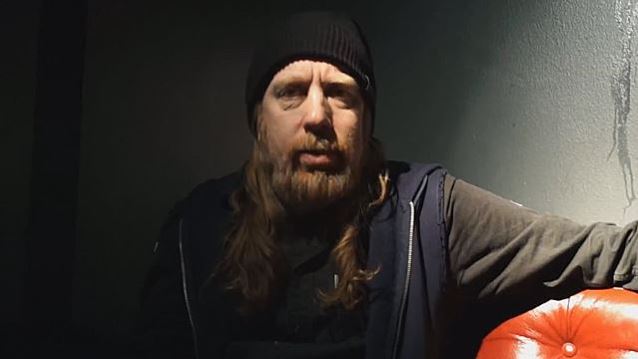 AT THE GATES Frontman TOMAS LINDBERG: Strength Of New Album 'At War With Reality' Is Its Diversity

Neuweltmusic conducted an interview with vocalist Tomas Lindberg of Swedish metallers AT THE GATES on January 31 at The Academy in Dublin, Ireland. You can now watch the chat below.

He continued: "We don't really have what you would call 'hits songs' that way, but I think the strength of this record is the diversity of emotions that it portrays, 'cause this kind of music usually is just angry — 24/7 angry — and we wanna portray a lot more melancholy and desperation… There's even some hope in some of the songs, some triumphant hope. So I think the diversity is the strength of the record."

Tomas added: "The songs that are most valuable for us are the ones that are kind of reaching out our sound a little bit. There's a few of those on the record — 'Heroes and Tombs', 'The Night Eternal' and 'Order From Chaos' — which are breaking new ground for us. That's very important for us. But, I mean, all the songs mean a lot to us, 'cause it's a very personal record."

"At War With Reality" was released on October 28, 2014 (one day earlier internationally) via Century Media. The CD, which sold 7,700 copies in the United States in its first week of release to debut at position No. 53 on The Billboard 200 chart, was recorded at Studio Fredman in Gothenburg and was mixed at Fascination Street Studios in Örebro, Sweden with Jens Bogren (OPETH, KATATONIA, SOILWORK, PARADISE LOST, KREATOR).

Lindberg told Horns Up Rocks! abour the writing and recording process for "At War With Reality": "We've been very, very meticulous with this one. With the writing process, it went through a thousand different filters before we actually said that we were finished with the writing. But, you know, the way we did it — like, we didn't announce that we were doing a new record until we had all the material, so we actually wrote in secrecy, so we weren't stressed about what other people might think or how they would react. So we actually had an idea that anything goes — we should try anything that comes into our heads, but also anything could be thrown away. So it's lot of 'kill your darlings' — everybody has to agree about everything that was recorded. And that takes a lot of time. But if you have a positive, creative vibe where everybody is willing to sacrifice their favorite parts, or whatever, to make the best compromise, you will come up with a great album, if you take your time… That's where the maturity comes in. Back in [our] early 20s, it's your way or the highway, whereas now, it's actually [more] important for me that everybody else is happy than I'm happy. It's a totally different vibe when we do this now."