ATREYU will embark on a U.S. headlining tour this fall. Support on the trek, which will kick off on November 9 in Phoenix, Arizona and end on December 13 in Anaheim, California, will come from MEMPHIS MAY FIRE, ICE NINE KILLS and SLEEP SIGNALS.

ATREYU will release its seventh full-length album, "In Our Wake", on October 12 through Spinefarm.

Following a hiatus post-"Congregation Of The Damned" in 2009, the musicians returned firing on all cylinders with "Long Live" during 2015. It crashed the Top 30 of the Billboard Top 200 and earned widespread acclaim. Along the way, the boys sold out countless headline shows in addition to sharing the stage with everyone from SLIPKNOT and LINKIN PARK to Chris Cornell and AVENGED SEVENFOLD.

Following a two-year tour cycle for "Long Live", ATREYU regrouped in Southern California and started sharing ideas for what would become offering number seven. Ceremoniously, they all agreed it would be the right time to reunite with producer John Feldmann who famously helmed "Lead Sails And Paper Anchor".

The band recorded in two chunks bookended by drummer/vocalist Brandon Saller's touring obligations for HELL OR HIGHWATER. Working out of Feldmann's Los Angeles studio, they embraced this new approach as the producer still made them"wonderfully uncomfortable and willing to push harder," according to vocalist Alex Varkatzas.

As a result, the record sees ATREYU once again evolve. The first single and title track "In Our Wake", hinges on a slow burning, but bombastic percussive buildup before charging ahead with an undeniable chant and fiery fretwork.

"I feel like this is the record that people will remember our band by," Brandon states. "I'm saying that because the best parts of ATREYU happened on it. We're continuing something we began a long time ago. This band means everything to me. We've been through incredible highs and incredible lows. We've loved each other, and we've wanted to kill each other. Somehow, twenty years later, it's reached a whole new level. I feel like we're alive, and ATREYU has never been more on fire than we are now." 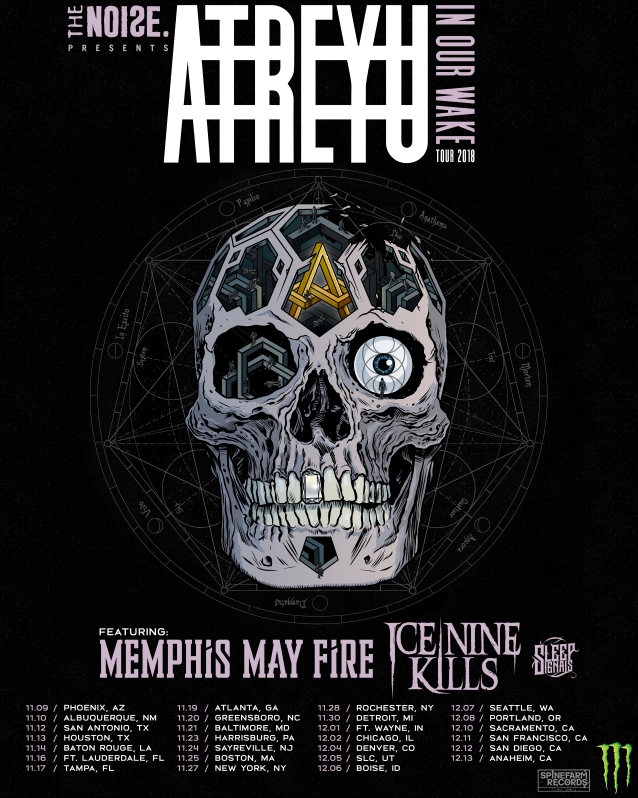