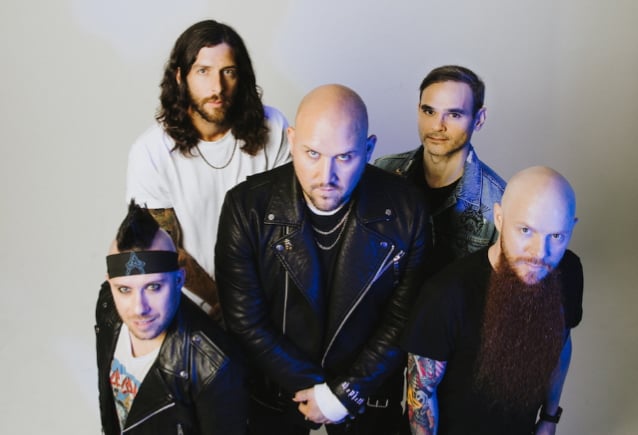 California metallers ATREYU have released the official music video for the title track of their new album, "Baptize". The LP is being made available today (Friday, June 4) via Spinefarm Records.

"Baptize" marks ATREYU's first album since the departure of vocalist Alex Varkatzas last September. The LP showcases ATREYU's current lineup consisting of Brandon Saller focusing completely on singing after previously sharing lead vocals with Varkatzas for most of the band's two-decade-plus existence. Sitting behind the kit is Saller's HELL OR HIGHWATER bandmate Kyle Rosa, who had filled in for Saller on drums in 2019 after Varkatzas bowed out of the band's European tour while dealing with serious back and hernia issues.

Asked in a recent interview with the "RRBG Podcast"if fans have responded positively to ATREYU's lineup change, guitarist Travis Miguel said: "For the most part, yeah. There's obviously naysayers and people who are bummed out. And that's totally fine — I mean, we all expected that. Because change in any shape or form, really, can be very uncomfortable. Especially for a band that loses their frontman, a lot of bands, they either thrive or it just doesn't resonate the same with the listeners. But luckily, it's not like we got a complete stranger coming in and moving up to the frontman spot. Brandon, obviously, did just about 50 percent of the vocals on all ATREYU stuff anyway. And he's been working his ass off kind of transitioning from literally the dude from behind the drums to into the front of the stage.

Saller told U.K.'s Rock Sound about the "Baptize" album title: "For obvious reasons, I think that people have seen, or will see, the title of the album and understand where we're coming from. But I think that it more aptly applies to a more broad spectrum of what I think a lot of people need right now. I think people need the concept or the idea sparked in their brain that a fresh start is something that can exist. And I think a lot of people, especially in the last year or so, get stuck in a negative rut or a kind of undetermined rut. And besides it being kind of a fresh start and a new beginning for us, we hope that it kind of be that idea for people as well, because we all need it right now. Everyone needs that jolt to get things back to normal, even in your mind."