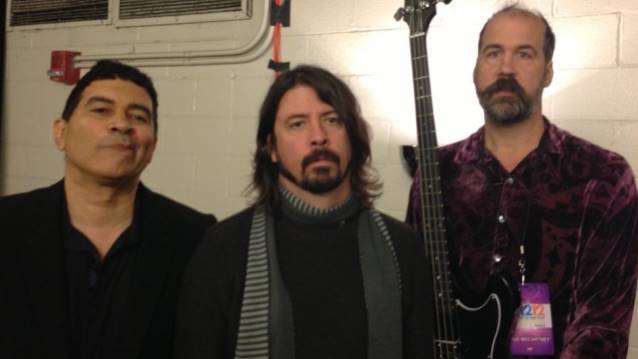 A short audio clip of the surviving members of NIRVANA and Joan Jett rehearsing the NIRVANA classic "Smells Like Teen Spirit" last night (Wednesday, April 9) is available in the YouTube clip. The footage was recorded by a reporter for Alternative Nation, who was roaming the halls of the Barclays Center in Brooklyn, New York in advance of tonight’s Rock And Roll Hall Of Fame festivities at the venue.

A clue about the Jett and NIRVANA pairing first emerged on Tuesday (April 8) when a photo posted on at the NIRVANA Facebook page showed Dave Grohl's drum kit, Krist Novoselic's bass, Pat Smear's guitar and what appears to be a guitar belonging to Jett.

According to The Pulse Of Radio, Dave Grohl and Jett have some history together, with Grohl and his FOO FIGHTERS bandmates performing with her on a segment of "Late Show With David Letterman" a while back.

R.E.M.'s Michael Stipe will induct NIRVANA at Thursday night's ceremony, which will take place at the Barclay Center in Brooklyn, New York.

The Pulse Of Radio asked Charles R. Cross, NIRVANA's biographer, what late frontman Kurt Cobain might have thought about being inducted into the Hall Of Fame. "Kurt won awards when he was alive, he won MTV Music Awards, he did go to those ceremonies, he did give speeches," he said. "You know, at the same time, it was an uncomfortable relationship for Kurt. So my feeling is, he would have been honored to have been included with so many legends that he loved, and he was a student of rock history, so to be there I think he would have appreciated. At the same time, I think he would have managed to say the most sarcastic things possible as he was accepting that award."

Accepting at the induction ceremony will be Cobain's widow, Courtney Love, who has a longstanding feud with Grohl and Novoselic over the use of NIRVANA's music.