Norwegian black/thrash metal band AURA NOIR will release its new album, "Hades Rise", on August 25 via Tyrant Syndicate, DARKTHRONE's Peaceville sub-label. "Hades Rise" follows on from where 2004's "The Merciless" left off. Undoubtedly the band's dirtiest and biggest hammer to the face to date, "Hades Rise" embraces the spirit of bands like VENOM to serve up an overdose of headpounding chaos. Recorded and produced by the band themselves in bassist/vocalist Apollyon's (real name: Ole Jørgen Moe) cellar studio, the album also contains guest appearances from Danny Coralles (AUTOPSY, ABSCESS) and the band's former guitarist Blasphemer (ex-MAYHEM). 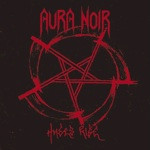 AURA NOIR was formed in 1993 by Aggressor (real name: Carl-Michael Eide) and Apollyon , who sent out a couple of demos before releasing the underground EP "Dreams Like Deserts" in 1995. In 1996, they were joined by MAYHEM guitarist Blasphemer (real name: Rune Eriksen), who contributed to "Black Thrash Attack", the band's first full-length CD.

In 2004, AURA NOIR became the first band to be signed to Tyrant Syndicate Productions, a sub-label of Peaceville Records run by Nocturno Culto and Fenriz of DARKTHRONE). They released their next album, "The Merciless", which featured Nattefrost of CARPATHIAN FOREST and Fenriz on guest vocals.