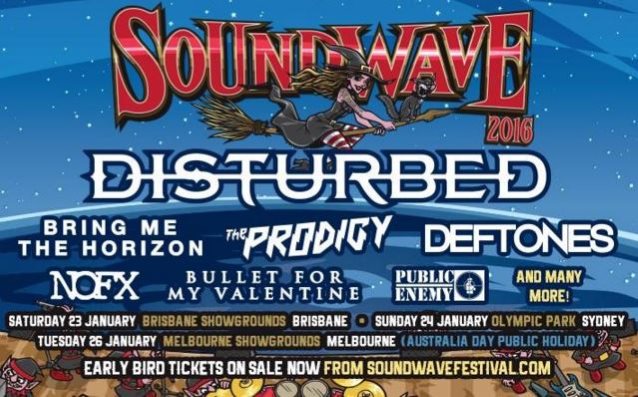 The 2016 edition of Australia's Soundwave festival has been canceled a month before it was scheduled to get underway due to "poor ticket sales."

The three-day, three-city event was scheduled to take place in Brisbane on January 23, Sydney a day later and Melbourne on January 26.

In a series of Twitter posts, Soundwave head honcho AJ Maddah said: "I am devastated to have to announce the cancellation of Soundwave 2016 due to poor ticket sales. I am very sorry. I tried my best."

He went on to say: "Thank you to all the fans, bands and people who supported the event for the last 12 years. I wish we could have ended it on a better note."

Maddah added: "Great triumph for the Internet hate squad and the trolls. Congratulations, guys. Only thing is, you are now fast running out of targets."

Maddah told fans to seek refunds from the point of purchase and accused ticketing companies Eventopia and Ticketek of refusing to release finances from ticket sales to fund the festival and help pay artists booked for the event. However, main ticket retailer Eventopia has directed fans back to the promoter, saying he is "responsible for all ticketing funds that were advanced." In an e-mail sent to ticketholders shortly after after Maddah's tweet announcing the festival was canceled, the company said it had met all its contractual obligations. "Throughout the onsale period, Eventopia complied with all of its obligations under its ticketing services agreement with the Soundwave festival promoter, Hounds Of Hell Pty Ltd.," the e-mail read. "In line with our ticketing sales agreement, the festival promoter is responsible for all ticketing funds that were advanced, and is directly liable to all ticket purchasers for issuing customer refunds."

Rumors of Soundwave's cancelation circulated earlier this week when L7 announced it would not be appearing at the festival. In addition, both BRING ME THE HORIZON and NOFX were reportedly waiting for their deposits to be paid.

Maddah explained in ean earlier tweet: "Essentially, here are the brief facts. Eventopia were supposed to give Soundwave a scheduled advance to pay deposits to NOFX and [BRING ME THE HORIZON]. Their CFO changed her mind and decided not make the advance but didn't tell anyone. So we (Soundwave and bands) waited and waited for money.

"If they had informed us that scheduled funds were cancelled, we could have made other arrangements."

Other acts who were scheduled to due appear at the 2016 event included DISTURBED, DEFTONES, KILLSWITCH ENGAGE, BULLET FOR MY VALENTINE and PUBLIC ENEMY.