On how "The 100 Greatest Metal Guitarists" came to fruition:

"I'm a geek who makes lists, and while I was driving around one day it occurred to me that no-one had really made a definitive list of the most accomplished guitarists in heavy metal. It's been done in a kind of half-assed way by a few magazines, but the compilers usually confuse rock with metal and fail to take into account the techniques that the musicians require to do the job. It felt like a fun book to write, but one which would serve a serious purpose — and that proved to be the case on both counts."
On how DEICIDE frontman Glen Benton came to write the book's foreword:

"I got to know Glen a couple of years ago after I approached him and Steve Asheim to see if they'd be interested in co-writing a DEICIDE autobiography, which may happen some time. I asked him to do the foreword for this book because he's worked with some fantastic guitarists in his time, and because he has a no-bullshit approach that suits this kind of book perfectly. I wanted 'The 100 Greatest Metal Guitarists' to be straight, honest and non-political, and happily that's how it's turned out."

On how he came to rank each respective guitarist:

"I used two rigorous criteria: 1) The guy's mastery of techniques such as sweep picking, tapping, alternate and legato picking and (crucially) whether he applies them tastefully or gratuitously; 2) How influential the guy is as a pioneer. So for example, Tony Iommi (BLACK SABBATH) is without a doubt the most influential metal guitarist of all time because he was the first out of the blocks, but because he can't do sweeps (as he cheerfully admits) he can't be number one. However, he's in the top ten, of course."

On whether "The 100 Greatest Metal Guitarists" features "underrated" guitarists:

"God yes. Trey Azagthoth of MORBID ANGEL, Chuck Schuldiner of DEATH, Ron Jarzombek of WATCHTOWER and BLOTTED SCIENCE, Jeff Waters of ANNIHILATOR, Ihsahn and Samoth of EMPEROR and Mikael Åkerfeldt of OPETH, plus quite a few others rarely get the credit they're due as guitarists. I wanted this book to right that wrong. They're underrated because their music is, by and large, too extreme or not exposed enough."

On future works, such as Glenn Hughes's autobiography:

"Glenn's book will come out in 2009 and will be amazing, I kid you not. The TOOL book comes out in April on Omnibus Press and then a biography of a major metal icon is coming out in June. No, not Dimebag. There will be press releases nearer the time. I also have a sci-fi novel brewing that I want to get out before too long, but finding the time to do all this stuff in between family, gigs, sleep and a reasonably debauched social life is tricky."

"The 100 Greatest Metal Guitarists" is being published globally by Jawbone Press, the world's leading publisher of guitar titles.

McIver told BLABBERMOUTH.NET, "The idea for this book came to me a couple of years ago after I read a list of the supposed 100 best metal guitarists of all time in a popular guitar magazine that should really know better. The list contained all these non-metal guitarists like Neil Young and Kurt Cobain, so I thought, 'Fuck this!' and wrote my own list, which became an 80,000-word book. The 100 guys I've included are pure metal: there's no-one taken from the hard rock world, so as much as I respect Randy Rhoads, Angus Young, Joe Satriani, Yngwie Malmsteen, Ritchie Blackmore and the rest of the rock shredders, they'll have to wait for another book. 'The 100 Greatest Metal Guitarists' features musicians from heavy metal, thrash metal, death metal, black metal, power metal, doom metal and grindcore bands and that's it!"

Joel McIver's recent appearance on "The Classic Metal Show" is available for download as an MP3 audio file at this location.

"The 100 Greatest Metal Guitarists" can be ordered via Amazon in the U.S. here and in the U.K. here. The cover appears below, as well as a shot of McIver with Kerry King of SLAYER and Mick Thomson of SLIPKNOT, both of whom feature in the book. 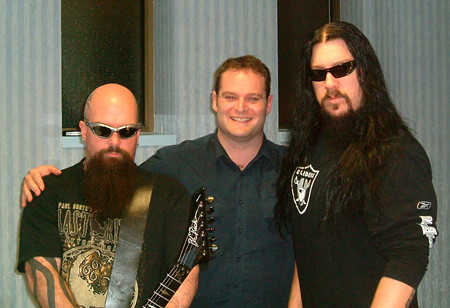