The artwork for "Altitude" can be viewed below. The CD was recorded at Arno Krabman's Graveland Studio and was mixed and mastered by Jochem Jacobs (TEXTURES) at Split Second Sound.

Commented the band: "The cover more or less depicts the peak of our civilization. These are the works of man, who has performed so many technological and scientific miracles in such a small amount of time. But confusion lurks. The balance is obviously shifting for the worse. It takes courage to step back and pursue happiness and prosperity through means less hazardous to our environment. Yet the man in his flying contraption does just that. He is vulnerable... and flying at high altitudes was never without peril."

"Altitude" will be released on February 13 (Germany, Austria, Switzerland, Italy) and February 27 (rest of Europe) via Metal Blade Records. The limited first edition will be made available as a digipak including an exclusive bonus track.

Commented bassist Jerome Vrielink: "This was the first time we did a lot of the recording (most of the vocals and the DI tracks for guitars and bass) at home so the precious studio time could be spent to lift everything to an even higher level in terms of sound and production. It was hard work, but definitely worth it! Needless to say, we are very proud of the end result!"

Check out an audio preview on the AUTUMNMySpace page.

AUTUMN in February announced the addition of singer Marjan Welman to the group's ranks. She replaced Nienke de Jong, who left the band in January.

Within the Dutch rock scene, Marjan is considered to be a promising talent with her warm voice and perfect timing. Her vocal contribution on the AYREON album "01011001" received outstanding reviews and shows a singer who stands her ground between a selection of highly acclaimed international vocalists. 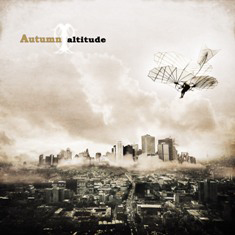