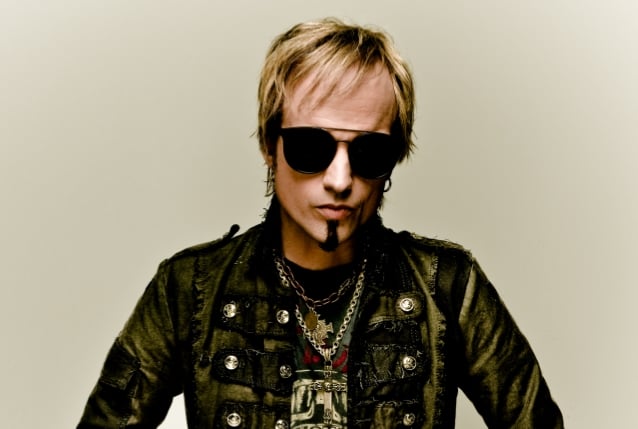 On how he would describe AVANTASIA to the uninitiated:

Tobias: "It's an interesting question. I always say it's more song-oriented, less polished little dirty sibling or brother or whatever to TSO [TRANS-SIBERIAN ORCHESTRA]. I would explain it [that way] to an American who didn't know what it was about, but if you do it in Germany, people will ask, 'What is TSO?' I think somebody even said that — it's like the filthy brother of TSO, but I wouldn't say necessarily filthy. TSO is more about the pyros and the Christmas and the storytelling and the hydraulics. We are more about the songs itself. We have songs that get radio airplay that are very MEAT LOAF-ish. It's heavily influenced by MEAT LOAF, but also a little bit by IRON MAIDEN and JUDAS PRIEST, that type of music as well. And QUEEN, of course, as well. It's really hard to describe."

On what to expect from the group's live performance:

Tobias: "We're going to play three hours, approximately. It depends on the mood we're in. Sometimes, those three hours become three hours, twenty [minutes] or three hours, thirty. It's very, very entertaining. We have big backing vocals, and we have all those singers like Bob Catley of MAGNUM and Geoff Tate and Eric Martin, Ronnie Atkins, Jorn Lande, Adrienne Cowen. I will sing; Oliver Hartmann will sing. We have many singers that come on stage and do duets together, and they're all so diverse. It's really a three-hour rock epic, hard rock, whatever you call it, music experience. It's a show — it's theatrical, but it's very entertaining. It's not based on storytelling. It's a concert experience. The rock operatic aspect of it is that it's so many great singers going on stage, going off stage, coming on stage again. It's an all-star show, but it's all original material of AVANTASIA. It's hard to describe, but everybody who's interested in hand-crafted, guitar-driven, energetic, bombastic and Sammet music — think old-school, old-fashioned, epic rock music with big melodies, testosterone-driven — it's highly recommended to come see the show. It's going to be very entertaining. It's like the musical equivalent to the movie 'Quo Vadis'."

On whether he watches the show during the moments where he's not on stage performing:

Tobias: "There's one song that Geoff Tate is doing in a duet with Eric Martin. There's another song that Jorn Lande is doing with Eric when I'm off stage. I don't watch the show while I'm offstage. It's so demanding — those three and a half hours of singing this very, very demanding, extremely high stuff, I take the time to breathe [laughs] and change wardrobe, not because I want to showcase another dress, but just because it feels like I've just been scuba-diving in a stage outfit. That's why I have to change."

On how it feels to have Tate and Martin singing his songs:

Tobias: "It's absolutely fantastic, and I'm flattered. I was a teenager when I listened to 'To Be With You' and 'Silent Lucidity' and 'Operation: Mindcrime'. That's legendary to me, and it's hard to believe that all of a sudden, you're standing next to these people, and they are lovely people and they're friends. It feels absolutely amazing. Most importantly, they deliver every single night. I just talked to our producer [Sascha Paeth], who's our guitar player as well, and Geoff — he sounds like 1988. It's absolutely fantastic how focused and how great he is, and he proves night by night why he's influenced, I would say, 98 percent of all theatrical hard rock and heavy metal singers that were singing in that 'operatic style'. It's breathtaking. And Eric is a soul machine — a soul music machine. He can sing the songbook backwards, and every single number would have such a great, soulful melody. They are the best at what they do worldwide, and it's always been legends and idols to me. It's great to be on stage next to them."

On what Tate brings to AVANTASIA:

Tobias: "It makes us so proud, and it's so great to see him feel so comfortable, smiling on stage. He's singing his guts out. All the high notes, and they are there, spot-on. He's smiling and we're having a great time, and then after the show, we have a bottle of red wine — a bottle of his red wine. It's really funny, because when we played near his winery that he has here in Germany, all of a sudden, one of those guys came with a truckload of Geoff's wine — 'Hey, I just brought something in.' Half of the truck was full of his wine."

On whether he's spoken with Tate about the influence of "Operation: Mindcrime":

Tobias: "He knows that I'm a big fan, and that album – and also the album before, 'Rage For Order'. It was a weird record, but it was a good weird. To me, it was outstanding. It was progressive; it was nothing people had ever heard before. 'Mindcrime' was just a perfection of that, and it was commercial, but at the same time it was conceptual, and that was a combination that really hit the... it was a zeitgeist thing, a spirit of the times thing. It was the right album at the right time. We spoke about that, of course, and how much it influences me. Geoff is a real artist. We spoke about it — sometimes things take off, and sometimes they don't take off, but I believe he's always been true to himself. At some point, a certain album will be successful, and sometimes, it will not be, but I really have to give him credit. He does what he believes in, in a very innocent way. Even the albums that came afterward that were maybe not as successful, I think the stuff that he did was always heartfelt, and that's to me the most important thing. I'd rather want a musician that does an album that I scratch my head at — 'Okay, that's not what I expected' — than an artist who does what is fashionable at a certain time."