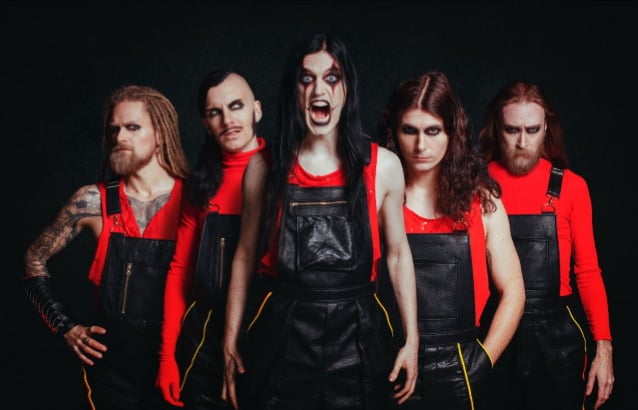 Swedish metallers AVATAR have shared another new song, "Cruel And Unusual". Check it out below.

"It feels self-evident," the band states about the track. "Violent thoughts channeled through violent riffs, demented thoughts driven by a sick groove. It's simply a very sexy song."

Earlier this fall, AVATAR, who are known to smash the boundaries between band, theater troupe, and cinematic masterminds with a series of celebrated albums and videos, and the immersive world of Avatar Country, a fantastical land where metal rules supreme, released four new songs. AVATAR also previously announced they signed to Thirty Tigers and have launched their own Black Waltz Records imprint.

In October, AVATAR postponed the last five shows on its "Going Hunting" U.S. tour after vocalist Johannes Eckerström tested positive for COVID-19, the disease caused by the novel coronavirus. Those concerts will now take place in late January and early February.

Last year, AVATAR frontman Johannes Eckerström spoke to Consequence about the band's eighth studio album, "Hunter Gatherer", and how the group's music is changing with age. "When you are dealing with anger and darkness in your 30s and want to be honest with it, and whatever angst that you carry with you as an adult compared to a teenager is a different way of dealing with it and articulating it, which makes this album very serious, and in that aspect, every album is an attempt to be as frank and honest as we can be," he said. "It's just that with every album, another layer of the onion is peeled off, so this is another deep level of honestly, as far as I'm concerned. One of the coolest things with doing this and working certain songs on each album is that each song has something in them where I'm, like, I wouldn't have been comfortable to say it like that when I was this age or that age. We have eight layers and albums done, so two more, and we will somehow be complete human beings, I guess."