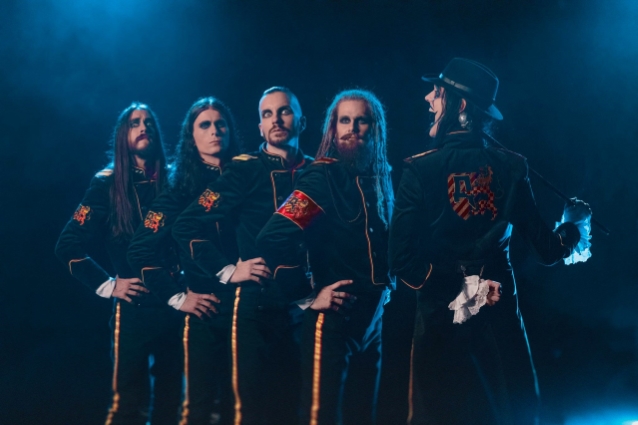 AVATAR Vocalist On Upcoming Tour With BABYMETAL: 'I Like The Opportunity Of Doing Something Different'

Prior to AVATAR's performance at the recent Sonic Temple Music + Art Festival in Columbus, Ohio, vocalist Johannes Eckerström spoke with Lou Brutus of HardDrive Radio. The full conversation can be seen below. A few excerpts follow (as transcribed by BLABBERMOUTH.NET):

On the group's recent live release, "The King Live In Paris":

Johannes: "For many years, I didn't see the point for us to do a live album at all. DEEP PURPLE made 'Made In Japan', and I think it kind of peaked there. But what happened with the whole journey that has been 'Avatar Country', [which] was us setting out to, after having written tragedy upon tragedy – which we will probably continue to do – [we] decided to make a comedy, decided to unveil the truth, our king and open the borders and all these things we did, what this album and this cycle really ended up being about is our relationship to our fans or audience. We released the first video for the album completely unannounced. It was this whole weird thing — 'Hey, look. We have a king now' — and people are on board just like that, immediately. When we wanted to make a film and there was a Kickstarter project ['Legend Of Avatar Country'], people were on board just like that. People have just been embracing all the crazy things we wanted to do, and [have] been really supportive and wanting us to really be ourselves. So much of what the second half of this cycle ended up being about is our gratitude to people letting us be ourselves, and we felt that a live album would be a great way to document that relationship we have with the people that are into AVATAR, and to have an album where you also can hear them."

On the fan-funded "Legend Of Avatar Country" movie, for which the group raised nearly $200,000:

Johannes: "With 'Avatar Country', the album came a very grand vision of everything around it. What we usually do or budget for and have time to do are those three videos per album. It has been like that for a couple [albums] now, but this time, already when being in the studio recording it, we had our man Johan [Carlén], that we have since years done videos with. We sat down with him in the studio and made an outline for the story [of] how to cover all the songs — all of the album. Then we filmed three of them and ran out of money to make videos with. Like I said in the campaign video, I did not have a golden Ferrari to sell, so we just [said] in a very straightforward, honest premise, 'We want to make this because we want to see it, and if you want to see it too, you can help us realize that vision.' People did. It's one of the weirdest things I think that I've experienced. We tripled the goal within 24 hours. We were and are extremely happy and grateful for that, but it was also honestly overwhelming. As far as I think about the business side of the music business — which you have to — it's a very kind of basic, simple formula that feels very straightforward when it comes to, 'Hey, we are coming to your town, and we're going to sing and dance and play. If you want to see that, you can pay a ticket. Hope you have a good time, and if we didn't suck, you might come back next time — and on your way out, you might buy a t-shirt.' For this, you're going to get that. That's pretty straightforward. You don't have to overanalyze what that actually means so much, but when people support a Kickstarter campaign like this, they give you money for something that doesn't exist that you then are supposed to deliver. They invest in something not really to see a monetary return. It's not like buying stock in something — they are investing out of love. It's this very strange crossroad where love and people having faith in you is at a crossroad with finances. It's still something that I from time to time try to process. The thing I come back to all the time is just gratitude, because it really shows that to this handful of people that helped us make this happen must really, really appreciate what we are doing, and what we have done up until now must have played some kind of role in their lives. It's huge."

Johannes: "[It's] crazy-cool. I'm a big, big fan since ever. It's an interesting and great match-up. I thought it was crazy and awesome, the idea that he would go on before us. I didn't really count the fact that that meant that we would have to go on after him. It's kind of a daunting task. I'm a very big fan of him. Specifically, in the context of being in the same dressing room, hearing him warm up , you go, [shakes head and raises fist]."

On the group's upcoming tour with BABYMETAL:

Johannes: "It's going to be special. It's different. I see it as first and foremost a great opportunity to hopefully [grow]. I feel like they probably skew slightly younger than we do overall. We always want to get the opportunity to show ourselves to [non-fans]. We don't think in terms of demographics when we do what we do aside from ourselves, so that's why we want to try to play a bit for everyone. With BABYMETAL, I see we're going to capture a bit of a younger audience, and also men with greasy hair and trenchcoats. We're going to get a lot of those. I think they're really cool... It's a great show, and we saw them live on a festival in the United States at some point somewhere. You can say what you want, but I was blown away. The musicianship, the showmanship that is going on there... [it's] delightful when something is different. It's going to be fun. I like the opportunity of doing something different. We're going to be who we are. It's just interesting to put us in different contexts."

AVATAR's new live album, "The King Live In Paris" , was released on May 17 via eOne. The 11-track set was recorded at the 2018 Download Festival in Paris, France.

The group's most recent studio album, "Avatar Country" , was released in January of 2018.

AVATAR's current North American tour with Devin Townsend, DANCE WITH THE DEAD and '68 wraps up June 15 in Las Vegas, Nevada. The group will return to America in September to tour alongside BABYMETAL.