AVENGED SEVENFOLD will embark on the North American "The Stage" tour in January. Support on the trek will come from BREAKING BENJAMIN and BULLET FOR MY VALENTINE.

Tickets go on sale to the general public on Friday, October 6 at 10:00 a.m. local time.

More dates will be announced soon.

AVENGED SEVENFOLD's headlining tour was originally supposed to happen this summer but the band changed its plans after getting offered a support slot with METALLICA on the latter band's stadium run.

AVENGED SEVENFOLD singer said M. Shadows said the band had to make the difficult decision to postpone its own tour so that they could be part of the biggest rock package of the summer. "It was actually a little bit of a tough decision, because we had just paid for the whole stage to get built, and that was a lot of money to build that stage set," he said. "And we were able to use it in Europe and in the U.K., but it is by no means paid off. So the whole idea was to go and take it throughout America, but then we got the call from Lars [Ulrich, METALLICA drummer], and it was, like, 'We can't pass that up.' It's just too big of a tour, it'll be too much fun. It's too good for the rock fan; the rock fans are gonna love that tour. So we basically had to say, 'Okay, we're just gonna put the stage in storage for a year and come back to it.' And hopefully that will all work out for us."

AVENGED SEVENFOLD worked with the producers of Cirque Du Soleil on the current show. M. Shadows told Metal Hammer: "The production that [was] built is different for us, different for anyone I've ever seen. The people we've hired don't do tours; they do Cirque Du Soleil." Shadows added that the production may require a different schedule, explaining: "This is gonna be drawn out into different types of touring. We're not going on tour for six months, it'll be two weeks on, two weeks off."

Shadows told The Pulse Of Radio that hiring Cirque Du Soleil was part of AVENGED SEVENFOLD's quest to create an entirely new kind of live show. "What we want to do is bring a new element to our stage production," he said. "We don't want to do all the same things that we've been doing. We're looking at a lot of digital image mapping, we're looking at inflatables, we're looking at a show that will be a brand new experience, definitely for rock and metal."

Cirque Du Soleil is currently the world's biggest theatrical producer, bringing its unique modern take on the circus concept to more than ninety million people in two hundred and seventy one cities around the world. This marks the first time that the company has collaborated with a touring rock band.

AVENGED SEVENFOLD is touring in support of its seventh album, "The Stage", which was released at the end of October 2016 with almost no promotion beforehand. 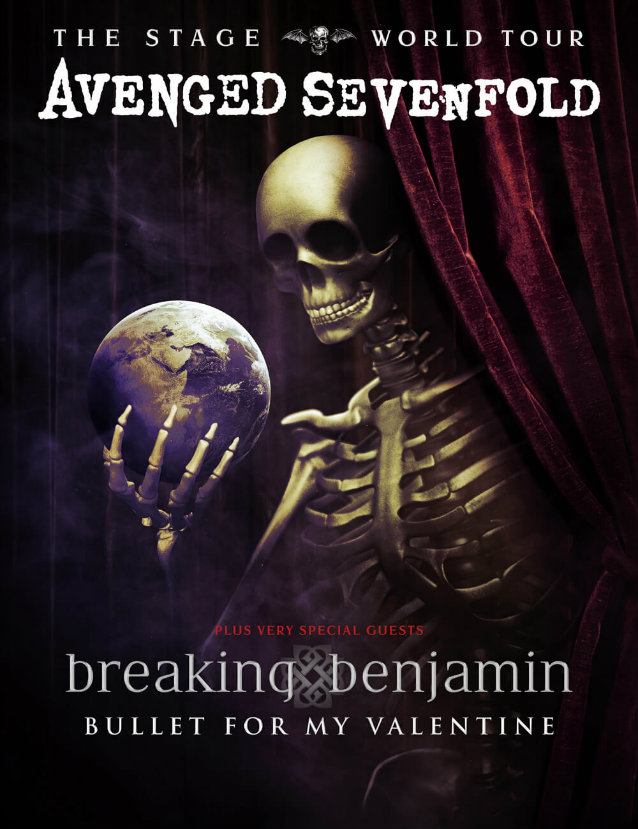