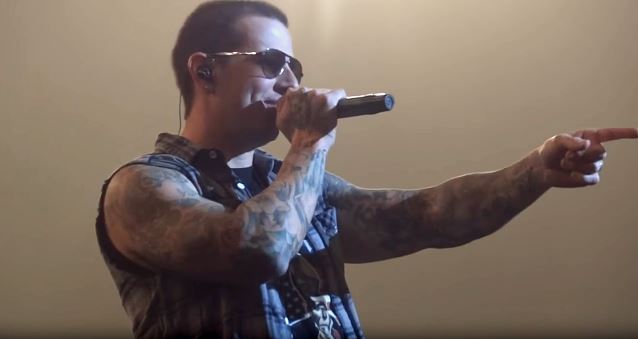 AVENGED SEVENFOLD's M. SHADOWS Looks Back On His Throat Surgery

Shannon The Dude of Louisville's rock station 95.7 QMF recently conducted an interview with AVENGED SEVENFOLD singer M. Shadows. You can now listen to the chat below.

Speaking about the surgery on his vocal cords that he underwent prior to the recording of AVENGED SEVENFOLD's 2005 album "City Of Evil", M. Shadows said: "Yeah, I had throat surgery in 2002, I think. It took a couple of years [to get all the lost notes from my voice], but I went from just being a kid that dropped out of high school to go on Warped Tour and had no training at all. And then when you come off a surgery, you have a lot of doctor's orders, which is don't talk for a couple of months and then go see this vocal coach. And so once I saw the vocal coach, I realized all the things I was doing wrong. But, you know, about six years stuff after that, I was able to get all my old stuff back, but with a little bit of technique so it doesn't hurt when you sing; it's not supposed to hurt when you sing. So I learned a lot from him and I still use him to this day."

AVENGED SEVENFOLD played a free show in Minneapolis on August 18 as a warm-up for its gig with METALLICA at the city's brand new U.S. Bank Stadium on August 20. The band decided to play for 1,500 lucky fans on a first-come-first-served basis at the city's First Avenue venue to "get the blood flowing" ahead of Saturday's sold-out concert, which also featured VOLBEAT on the bill.

AVENGED SEVENFOLD has been recording its seventh studio album, but it's not clear when the disc will be released since the band announced earlier this year that it was attempting to sever its contract with Warner Bros. Records.

The label sued the group in January for breach of contract, claiming the band owed it another studio effort and a live set on its existing deal.