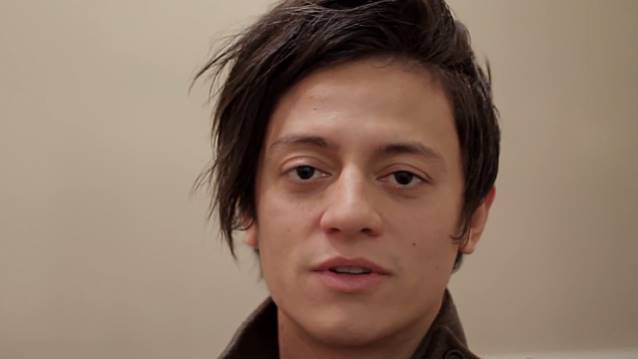 "We are writing this to inform you all that we will be moving forward without Arin Ilejay as our drummer. Arin has been nothing but a positive energy and monster drummer for us over the past four years. We love the guy and always will. We are and will always be grateful to him for helping us to move forward through some very dark times. Creatively though, we felt we needed to move in a different direction. While we can’t say more at this time, we are excited for the future and looking forward to sharing our plans soon with the greatest fans in the world. As always we appreciate your understanding and unwavering support."

Ilejay, a former member of CONFIDE, joined AVENGED SEVENFOLD in early 2011 as the replacement for James "The Rev" Sullivan, who died in December 2009.

Ilejay played on AVENGED SEVENFOLD's sixth studio album, "Hail To The King", which sold 159,000 copies in its first week of release, giving the California band their second straight chart-topper after 2010's "Nightmare".

Asked to describe how Ilejay rose to the challenge in making his studio debut with the group, AVENGED SEVENFOLD guitarist Synyster Gates told MusicRadar.com: "He really shined — [he] got the feel, the sound and the power. It was his first big record, but fortunately, he played a lot of shows with us before the recording, so that helped to clear the nerves away. And it wasn't a one-take kind of thing, so he was able to explore the songs, get inside them and make them sound right."

Ilejay's chops helped to steer the course of the music during writing and demoing sessions, as well. "Being that if was a riff-oriented record, we went in for a few days and made sure we had some things that were appealing to the ear," Gates told MusicRadar.com. "Then one of us would get behind the drums and jam it out. All of us can play drums a little bit, but we're certainly not on Arin's level, so he'd come in to show us what a real drummer can do and how the things would sound when played all-out. Hearing him made us either say, 'Hmm, that riff can be a little better,' or, 'Wow, that's amazing. We'll definitely base a song around that.'"

In an interview with MusicRadar.com, Arin stated about his playing approach on AVENGED SEVENFOLD's latest CD: "On 'Hail To The King', along with all of our fans, I thought I was going to be writing the craziest drum parts for that record, something to fill the shoes of The Rev. But the band wanted me to create my own sound and legacy. They wanted me to dumb it down and play caveman-like and spaced out, with big fills that support the music. I was bummed out about that at first, but it helped to have heard drummers like Lars. For the next album, we have kicked around the idea of having some crazy fills."