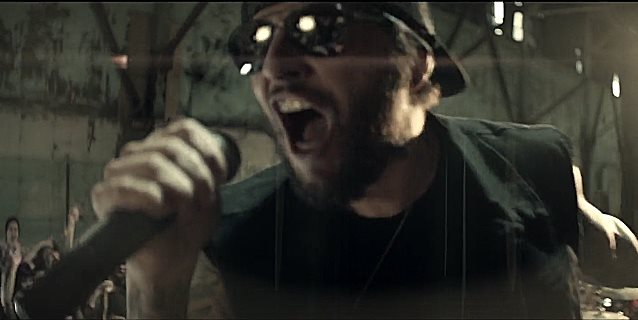 AVENGED SEVENFOLD's video for the song "God Damn" can be seen below. The clip was filmed in February with director Anders Rostad before a crowd of fan volunteers.

"There's a bunch of ideas that were thrown into the mixing bowl there," AVENGED SEVENFOLD singer M. Shadows told Billboard, which premiered the video, "but the main idea was to get fans involved and make sure the kids knew this is a song full of energy first and foremost — 'hey, this is a record we can wrap our heads around. It's cool live stuff. It's a rockin' song' — but at the same time, we wanted the technological hint in there, so as the video progresses you start seeing things glitching out and all of a sudden the world turns digital. And by the end, there's a little nod to the lyrics; you see an eyeball kind of in there as an Easter egg, which is kind of big brother watching what we do the whole time as the humans turn into a digital world."

"The Stage" debuted at No. 4 on The Billboard 200 album chart back in November following its surprise release. Co-produced by the band and Joe Barresi, the disc features eleven panoramic tracks tied together by an Artificial Intelligence theme. Inspired by the writings of Carl Sagan and Elon Musk, the album is the band's first thematic release. While the term "AI" conjures up images of robots and fantasy films, the band steers clear of a science fiction storyline. Instead, the album sees them taking a futurist's look at the accelerated rate at which technology's intelligence is expanding and what that means — good and bad — for the future.