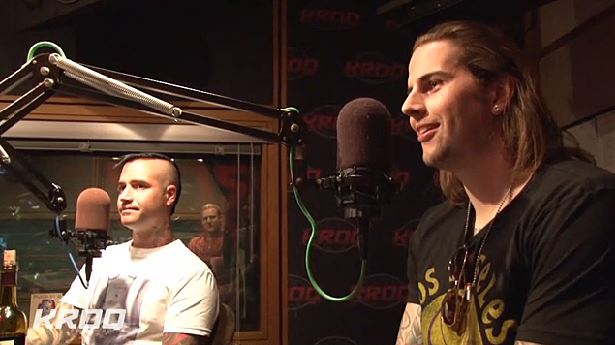 To help celebrate the release of their new album, "Hail To The King", AVENGED SEVENFOLD frontman M. Shadows and bassist Johnny Christ stopped by to co-host the "Furious 5 @ 9" with Nicole Alvarez on the Los Angeles radio station KROQ on Tuesday, August 27. Nicole and the guys chatted about the new album, which songs M. Shadows warms up to before shows (you'll be surprised),AC/DC being the biggest band in the world, NINE INCH NAILS, strip clubs, MÖTLEY CRÜE and more. You can watch video footage of their appearance below.

According to The Pulse Of Radio, the members of AVENGED SEVENFOLD have defended their musical choices in a new interview with the U.K.'s TeamRock Radio. Discussing the band's newly-released sixth studio effort, "Hail To The King", the bandmembers stand behind their decision to make a record that sounds more like old-school heavy rock, with M. Shadows saying, "We wouldn't have been happy making another [2010 album] 'Nightmare', we wouldn't have been happy making a [2003 second CD] 'Waking The Fallen', so if you're not happy doing it, what's the point of releasing it?"

Shadows adds, "To me that's the definition of a sell-out, is people that don't write the music that they truly want to write."

The singer told The Pulse Of Radio that he holds AVENGED SEVENFOLD records to very high standards. "We're not writing a record for money or to go on tour again," he said. "We're writing a record for our legacy. Like, we want to put out only good records, and we want to take our time with them and make sure it's the best thing that represents us at this time. And so, a lot of times we sit there and go, like, we don't want any filler, we don't want this, we need to get it tighter, tighter, tighter, better, better, better."

Shadows said a few months back that the sound of the new CD was channeling earlier records from acts like PANTERA, METALLICA, BLACK SABBATH and others, a far cry from the band's original, more hardcore style.

AVENGED SEVENFOLD recently notched the fifth No. 1 single of the band's career as the song "Hail To The King" reached the top of the Active Rock radio chart.

The band will begin a fall headlining North American tour on October 3 in Chicago, concluding on October 26 in Las Vegas. Support on the road trip will come from DEFTONES and GHOST.

"Hail To The King" is likely to sell between 170,000 and 180,000 copies in the U.S. in its first week of release, according to industry web site Hits Daily Double. The estimate was based on one-day sales reports compiled after the record arrived in stores on Tuesday (August 27). That figure should be good enough to land the group its second straight No. 1 debut. AVENGED SEVENFOLD's fifth album, "Nightmare", opened with 162,500 copies back in August 2010 to land at the top of The Billboard 200 chart.