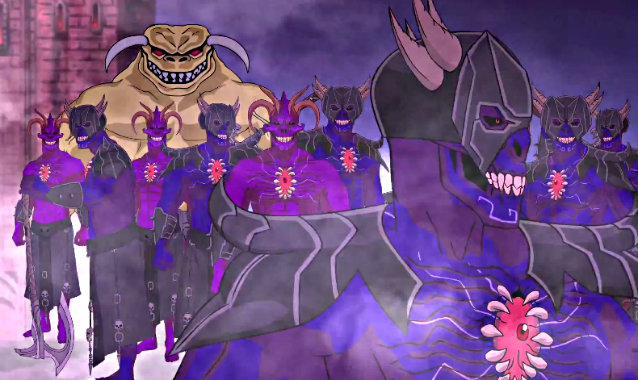 "First, we want to thank all of our friends that we just saw in Europe. Hands down the best tour that we have ever had over there. It was an honor to play for you all every night.

"As we promised, we are slowly filling in summer dates so we can come play for you again. We also have been getting quite a few requests for new countries that we haven't played yet. We will use this summer as an opportunity to come to few new places. Please stay tuned for that.

"As for the rest of the world, we hear you, and we will be coming soon!

"By now you've already heard announcements about Download festival, Graspop Metal Meeting, Nova Rock festival and Aerodome, and there will be a lot more dates announced in the coming months. Right now, though, we have decided to hang out at home until we get over to Australia for Soundwave Festival in February.

"Since we have a couple months off, we wanted to update you on a couple things that we promised a while back.

"First is our 'Hail To The King' animated series that we did with Machinima and Jon Schnepp. You may know Jon from his work on 'Metalocalypse' on Adult Swim. It's funny stuff and it was an honor to work with him. Below is the trailer for the series, which will debut December 15th. We hope it gives you something entertaining to watch over your holiday break. The series also plays as a backstory to our mobile game, 'Hail To The King: Deathbat'. We felt this was the best way to tell the story and give you all an idea about the type of game we are creating.

"This brings us to the game. Two years ago while touring in Southeast Asia, I looked around the bus taking us from the airport to the hotel and noticed everyone was on their phones and iPads playing different types of games. We had a discussion and decided that it would be fun to create one of our own. The problem was that we didn't feel passionate about doing a full-on typical music game. We wanted to do something different. Something inspired by some of our favorite games. So we came up with the idea of turning some of our songs and art work into a living, breathing, evil world. We wanted to bring the story of the Deathbat to life and allow you to control its destiny.

"While the game stands on its own in terms of the story and game play, we still wanted to add in some extras for our fans. In the game, you can unlock 16 pieces of never-seen-before artwork from all of our albums. There will also be 7 new Cam Rackam paintings available in the game. We also recorded 7 new songs. Now these aren't metal songs, they are theme songs for each level and are done in an old-school video game fashion with a new-school twist. There will also be reimagined versions of older songs. Basically, we have not only packed the game with exciting gameplay, but also a lot of things for fans that might now be interested in a video game.

"The trailer for the game will be released with the Machinima 'Hail To The King' series on December 15th as well. Expect a release date in early 2014 as we are in the Beta process now.

"Remember, the game and series go hand in hand. The animated series tells the story 'before' the game takes place. When the series ends, the game picks up.

"We hope these things keep you entertained while you're hanging out at home for the holiday season. Most importantly, we hope you all enjoy the time with your families and we will see you on the road as soon as we can make it to you."